This Thursday and Friday, the leaders of the major economic nations, their finance ministers and central bankers meet in Germany’s northern port city of Hamburg,

Yet, on the economic front the International Monetary Fund’s (IMF) World Economic Outlook (April 2017) projects a pick-up in global economic activity with a long-anticipated cyclical recovery in investment, manufacturing and trade. But in Europe, there are uncertainties posed by Brexit and continuing joblessness, especially youth unemployment in southern Europe. Protectionism continues to threaten, most vocally from President Donald Trump, who has also withdrawn the U.S. from the global climate accord.

The G20, originally a meeting of finance ministers, their deputies and central bankers, was formed in 1999 in the wake of the Asian and Russian financial crisis with Canada’s then-Finance minister Paul Martin playing a lead role. It was raised to the leaders’ level in the wake of the 2007-2008 financial crisis when then-U.S. president George W. Bush convened a summit in Washington (November 2008) to address the crisis. Canada hosted the G20 in Toronto in 2010.

The leaders’ summit is the culmination of a year-long process of meetings that in addition to the central bankers, finance ministers and sherpas, includes sessions involving labour, business, think tanks, youth, girls (Belinda Stronach was a driving force behind the Girls20 summit) and civil society.

The member countries include the G7 nations: Canada, the United States, Japan, France, Germany, Italy, the United Kingdom and the European Union, as well as Argentina, Brazil, Mexico, Australia, China, India, Indonesia, Korea, Russia, Turkey, Saudi Arabia and South Africa. With two-thirds of the world’s population, their economies account for approximately 80 per cent of world trade and global production.

The G20 has developed a de facto standing agenda.

First, the multilateral trading system. Expect words from leaders but there is no sense the World Trade Organization’s (WTO) Doha round will soon be concluded. Today, movement on multilateral trade rests with efforts to resuscitate the Trans-Pacific Partnership (TPP) and a series of smaller regional groupings, including the pending Canada-European Union Comprehensive Economic and Trade Agreement (CETA) and a possible Japan-EU free trade agreement.

Second, resistance to protectionism. Global Trade Alert reports that, notwithstanding the G20 pledge for standstill at the London 2010 summit, since 2008 governments have taken 7,815 protectionist measures ranging from local content requirements to discriminatory regulatory practices.

The G20 nations account for 65 per cent of protectionist measures but the good news is that there has been a sharp decline in such measures in 2016-17. WTO Director-General Roberto Azevêdo urged G20 nations to “continue improving the global trading environment, including by implementing the WTO Trade Facilitation Agreement, which entered into force in February this year.”

Fourth, achieving sustainable fiscal policy. This means saving in good times so you can spend in recession and then get back to balance as quickly as possible.

Fifth, supporting sustainable development. With the conclusion of the Millennium Development plan in 2016, nations are now committed to 17 goals in the new UN Sustainable Development Agenda to be achieved by 2030, including no poverty, gender equality, good health and well-being, clean water and sanitation, reduced inequalities, decent work and economic growth.

What does the Hamburg summit want to achieve?

Merkel has set out her priorities. Leaders must address three questions:

Build resilience, improve sustainability, assume responsibility – the leaders are expected to act on these three aims to:

These items are all likely to be reflected in the communique, no matter how wishy-washy the language.

What about deliverables from Hamburg?

Perhaps the most we can expect is agreement to address inequalities, at home and abroad, in the face of the continuing domestic populist movements.

Merkel, with support from new French President Emmanuel Macron, wants further climate action. The German environment department has published a fact check on Trump’s climate statements. Trump is not likely to support further action and, by tradition, G20 decisions are made by consensus.

Trump promises to be the wild card at the summit, having already clashed with his fellow leaders at the NATO and G7 summits earlier this year over defence spending, trade, climate and refugee policy. Unhappy with foreign steel and aluminum imports, Trump is now considering raising tariffs on all imported steel to the alarm of Europe and Canada.

Most of the action will be at the bilateral level. It will be the first meeting between Trump and President Vladimir Putin and it is reported that Trump wants a set of deliverables to offer to the Russian president. Chinese President Xi Jinping is visiting Russia and Germany prior to the visit to discuss the new Silk Road and Belt – land and sea trade route – initiative from China through South Asia, Central Asia and then Europe. EU and Japan trade negotiators are working to conclude free trade negotiations in time for the summit. The German decision to block a rally of Turkish citizens working in Germany with Turkey’s President Recep Tayyip Erdogan will make for an interesting discussion with Merkel. Putin may also be called out over Russian interference in the U.S. and European elections.

As is always the case at these summits, security will be paramount with an estimated 20,000 police with dogs, horses and helicopters and 7.8 kilometres of steel barriers to prevent disturbances but also to contain the perennial protesters. 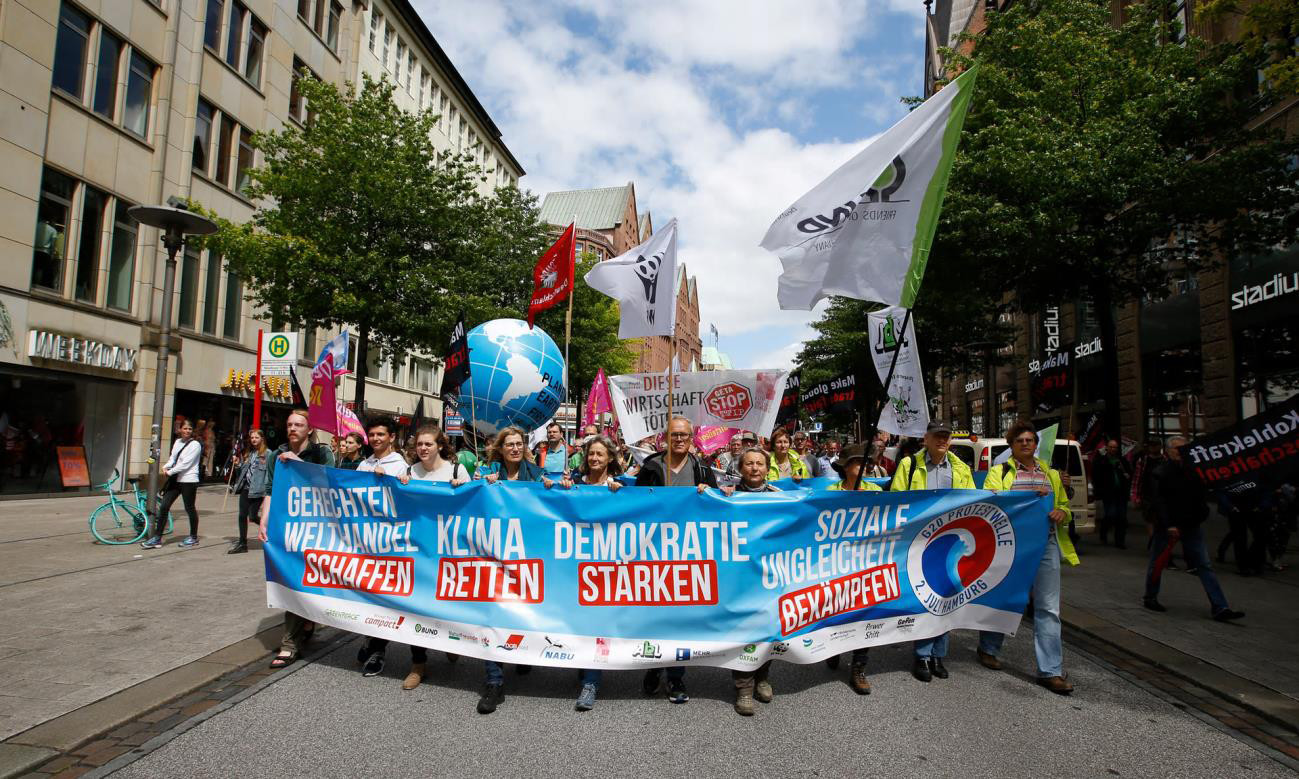 This is Prime Minister Justin Trudeau’s third G20 summit. A contender for Asia-Pacific Economic Co-operation (APEC) “hottie” with Mexico’s President Enrique Peña Nieto at his first summit (2015), Trudeau is now seen as an experienced leader (third in G7 seniority), a constructive internationalist and someone who is managing well his relationship with Trump.

According to the PMO and Global Affairs releases on the G-20, Mr. Trudeau will “promote inclusive economic growth, progressive international trade, gender equality, action on climate change”, and reiterate Canada’s commitment to working with partners to develop a co-ordinated global response to terrorism while safeguarding human rights.

Trudeau wants to move on CETA. It is delayed from its originally anticipated July 1 provisional implementation because of interpretive disputes around the allocation of Canadian cheese imports and brand-name drugs.

There will be discussions on the TPP with Asian and Latin American partners, and the approaching renegotiation of the North American Free Trade Agreement (NAFTA) with Trump and Peña Nieto.

Yes. At a time when globalization, the maintenance of a liberal international order and multilateral co-operation are under question, the G20 is an important forum to discuss, and hopefully advance, common global interests.

The G-20 filled a gap in the architecture of top table meeting places at the UN and G7.

The permanent members of the United Nations Security Council – Russia, China, France, Britain and the U.S. – represent the world of 1945 and the early Cold War. As we witness with Syria and other crises, getting the Security Council to act constructively is very difficult. Reforming it is an exercise in futility.

The G7 group of leaders – the U.S., France, Britain, Germany, Japan, Italy and Canada – was created in 1975-76 following the economic crisis that OPEC induced. It is Eurocentric. It doesn’t include China, India or Brazil. Russia joined in 1998 but it was suspended in 2014 after its invasion of Crimea.

The G-20 complements, at the leadership level, the work of the other major financial and economic institutions: the ‘Bretton Woods twins’ – the IMF and World Bank – and the World Trade Organization.

More people will work on the draft of the final communiqué than will read it but the process of getting there is what really matters. The ongoing meetings between central bankers and finance ministers (the original G20) now include other ministerial meetings as well as regular discussions with business, civil society and think tanks.

What is important about these summits is not the prepared statements delivered at the main table, but the frank discussions and informal meetings that take place in the corridors and meeting rooms around the main conference. Winston Churchill, who popularized the word “summitry”, observed that “jaw-jaw” between leaders is better than “war-war”.

The best Canadian source for G20 documentation, with a chronology of past summits, is the University of Toronto’s G20 Information Centre, managed by John Kirton.

The Centre for International Governance Innovation (CIGI) in Waterloo does excellent research work on G2O issues, and especially noteworthy are recent reports on refugees, climate change and trade.

The official German site has useful information as does Global Affairs Canada.

A former Canadian diplomat, Colin Robertson is Vice President and Fellow at the Canadian Global Affairs Institute and Executive Fellow at the University of Calgary's School of Public Policy. He is Senior Advisor to Dentons LLP. He is a Distinguished Senior Fellow at the Norman Paterson School of International Affairs at Carleton University. He is a member of the advisory councils of the Conference of Defence Associations Institute and the North American Research Partnership and participant in the North American Forum. He is a past president of the National Capital Branch of the Canadian International Council. He is an Honorary Captain (Royal Canadian Navy) assigned to the Strategic Communications Directorate. He writes a regular column on international affairs for the Globe and Mail and he is a regular contributor to other media.

In all its activities the Institute is a charitable, non-partisan, non-advocacy organization that provides a platform for a variety of viewpoints. It is supported financially by the contributions of individuals, foundations, and corporations. Conclusions or opinions expressed in Institute publications and programs are those of the author(s) and do not necessarily reflect the views of Institute staff, fellows, directors, advisors or any individuals or organizations that provide financial support to the Institute.