After 15 years of war on terror, are we any safer?

by Robert Muggah and Parag Khanna

The 9/11 attacks on New York City and Washington were devastating, including for dozens of countries and cities outside the US. The subsequent invasions of Afghanistan and Iraq, and the prolonged global war on terror set off a complex chain reaction of destabilization across Africa, Central Asia and the Middle East. They also triggered violent ripple effects stretching from North America and Europe to Southeast Asia. Few singular acts have so fundamentally swayed the arc of history.

Fifteen years on, rather than feeling safer, there is a palatable feeling that terrorism is out of control. High-profile attacks by extremists on major cities across Belgium, France, Lebanon, Turkey and the US have set the world on edge. While some of the attackers are home-grown and their grievances partially local, their stated motivations are almost always traced back to interlocking crises in the greater Middle East. Commentators talk ominously of a new kind of world war spanning the entire globe. Populists are calling for the closing of national borders to keep “would-be” terrorists at bay.

A new type of war

This new guerrilla-style war is not being waged by conventional forces, but rather by drones and counter-terrorism forces on the one side and a shifting constellation of organizations such as ISIS, Al Qaeda, Boko Haram and Al Shabaab on the other. The latter’s methods are highly decentralized, networked and asymmetric. Targets are not restricted to specific population groups or even symbolic sites as in the past. Rather, the goal of groups such as ISIS is to lay siege to cities, effectively shutting them down for as long as possible.

While publicly available statistics are patchy, it is undeniable that terrorist violence is on the rise. More than 32,700 people were killed as a result of terrorism in 2014, 80% more than the previous year. The latest reports suggest that more than 28,000 people died during terrorist events in 2015 and that a similar number will likely be killed in 2016. There is a wary resignation that attacks are inevitable in the West: it is not so much whether there will be another attack on a major global city, but where, when and how big.

Looking beyond the headlines

But are European and American cities really the new frontline of a global jihad? More controversially, is terrorism really the key risk contributing to fragility in cities in the 21st century? One way to answer the question is to consider the numbers. This is not as clear-cut as it sounds. The reliability and coverage of data on lethal violence is mixed, but statistics on violence in cities is an important indicator of actual and future risk. Seen this way, Brussels, Paris, London, Nice and New York are outliers when it comes to terrorism. As horrific as the attacks on these cities may be, they are highly unusual events.

The Global Terrorism Database and other reports issued by the US State Department have issued remarkably consistent findings over the past few decades. The vast majority of terrorist incidents are a function of hyper local political grievances in a small number of countries. In fact, less than 3% of terrorist-related killings occurred in the West over the past 15 years. The past several years have been no different, with an overwhelming number of victims concentrated in a handful of cities in Afghanistan, Iraq, Nigeria, Pakistan, Somalia and Syria.

The extent of terrorist violence in these six countries is breathtaking. They are home to the world’s 20 most heavily targeted cities over the past four years. 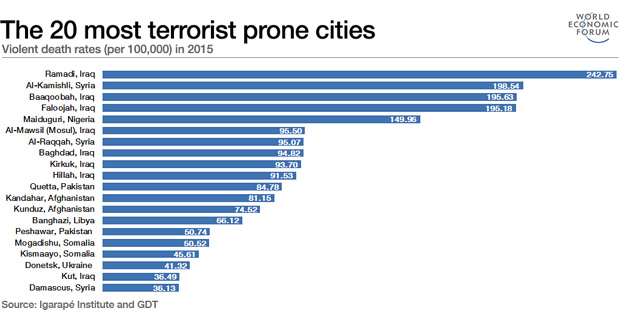 A review of terrorism in over 2,100 cities revealed that violent death rates (per 100,000) were well above those one might expect in a war zone. Major urban centres like Baghdad, Karachi and Mogadishu stand out. But it’s unlikely you’ve ever heard of most of the others.

However, a breakdown of the terrorism statistics suggests that it is not solely an urban phenomenon, much less one restricted to large cities. It is also a function of the extent of urbanization in a given country and, just as important, terrorist tactics, which vary from place to place. In Iraq, slightly less than 50% of terrorist killings occur in cities of over 250,000 people. In Syria, the proportion is 70%. Meanwhile, in Afghanistan the ratio is just 10% urban, while it falls to 8% in India.

It’s not just terrorism we should be worrying about

While there are justifiable concerns with terrorism, it is worth noting that it is not the only – or even the most significant – cause of violent death around the world.

Terrorist-related deaths pale in comparison to the scope and scale of homicidal violence in cities. Between 400,000 and 500,000 people are murdered every year, at least 10 times the number dying as a result of terrorism. Though terrorist-related events spiked in some Western cities over the past two years, vastly more people are at risk of murder. This is especially the case for young men, for whom homicide is still one of the greatest threats to life.

As in the case of terrorism, there are a number of hot spots where urban homicide is especially prolific. 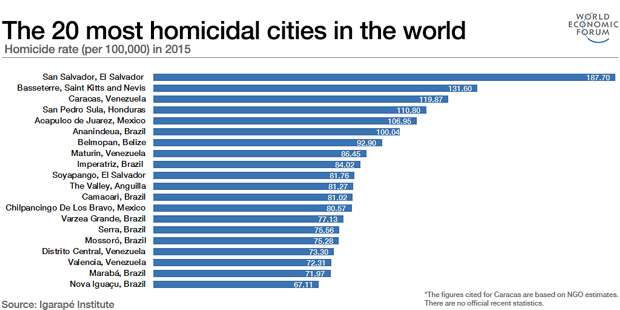 Latin America and the Caribbean, for example, is home to just 8% of the world’s population, but registers 33% of its homicides. At the city scale, residents of cities in Brazil, the Democratic Republic of the Congo, Colombia, El Salvador, Guatemala, Honduras, Jamaica, Mexico, South Africa, Trinidad and Tobago and Venezuela are most at risk. An astonishing 47 of the 50 most homicidal cities in the world are located in Latin America.

What it all means

So what are some of the wider implications of this morbid retreat into the data of violent death? At the outset, it is a reminder that a comparatively modest number of countries (and cities) are dramatically more at risk of terrorist and homicidal violence than others. Clearly, greater investment in diplomacy, crisis management and conflict prevention is urgently needed, alongside improved intelligence sharing within and between cities. This would certainly be more cost-effective – both economically and in terms of live saved – than hardening potential targets from asymmetric attacks in Western cities.

Perhaps even more important, the data shows that homicidal violence is a much larger problem than terrorism. What is more, it is just a handful of cities – most of them in Latin America, the Caribbean and parts of Africa – that account for the lion’s share of murders globally. If lethal violence is to be reduced in these areas, the issue must be prioritized by national and municipal authorities, with a focus on driving down inequality, concentrated poverty, youth unemployment and of course corruption and political and criminal impunity. Doubling down on the world’s most violent cities could do much to drive down the global burden of violent death.

In the end, it is important to recall that the threats of urban fragility are broader than a narrow focus on the prevalence of lethal violence. If cities are to become more resilient – to cope, adapt and rebound in the face of shocks and stresses – they will need to contend with a wide range of threats, not just terrorism and homicide. This is as much about promoting good governance as reducing structural social and economic risks in cities that give rise to extremism and murder. At the very least, it implies rethinking the role of cities as not just a site of violence but a primary driver of security in our time.

Was Canada invited to join AUKUS? Officials mum but stress no interest in subs

First does slowly climbing, but how to reach remaining unvaccinated? Experts weigh in

Federal leaders united on need to fight ilitary sex misconduct, but differ on how

China, US Tug-of-War Tightens as Both Try to Cement Friendships around Asia

O’Toole mum on how many immigrants he would bring, promises tougher border measures

‘The people have spoken’: More focus on racism needed in campaign, activists say

In a heartbeat, 9/11 changed America forever