Chart 1 shows the overall diversity from the 2016 baseline, with women just over one-third of all appointments, visible minorities significantly less than the 15 percent represented in the Canadian population, and Indigenous peoples somewhat less compared to the 4.3 percent share of the population. 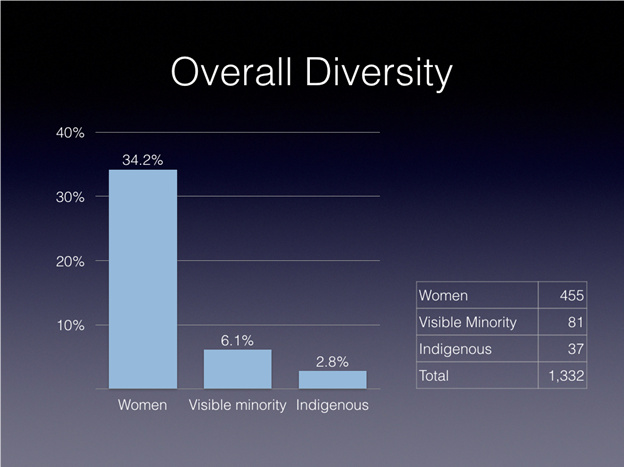 A few methodological caveats for this data. While gender data is accurate, data for visible minorities and Indigenous peoples is less so, particularly with respect to data for administrative tribunals (e.g., large bodies like the Immigration and Refugee Board, Parole Board, Social Security Tribunal) given that name-based analysis cannot be combined with photographs (unlike, for example, for the various museum and crown corporation boards where photos are published.

As a result, these groups are somewhat under-represented, especially when dealing with Black Canadians and Métis.

Chart 2 analyzes the diversity of the 133 appointments made since 2016, showing slightly more women appointments than men. Visible minority appointments remain consistent at 6.1 percent, with no Indigenous appointments to date (again being mindful of the above caveats). 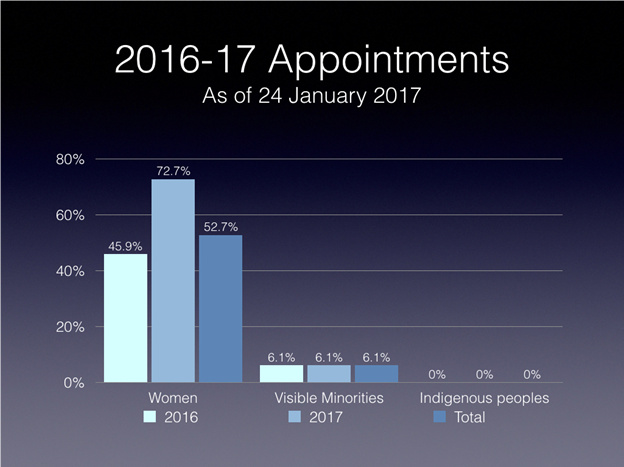 From my discussions with PCO ATIP officials (who have been helpful), along with the documents they have released, it appears that there is not yet systematic tracking of diversity data that allows the creation of consistent annual reporting (I had to go through the appointment index line by line and organization profile by profile to prepare this analysis).

However, PCO has confirmed that diversity information will be included in the Privy Council Office’s annual Departmental Performance Report, hopefully as detailed as the Independent Advisory Board for Senate Appointments report on applications.