Donald Trump has gone squishy by stages on the North American Free Trade Agreement, which he once called “the worst trade deal maybe ever signed anywhere.” In April, aides persuaded him not to abrogate the 23-year-old trade pact with Canada and Mexico. On July 17, moderates scored another victory: The Office of the U.S. Trade Representative released objectives for renegotiating Nafta that aim to tune it up, not gut it. “Overall this looks like a Nafta modernization. It’s not like the whole of Nafta is up for grabs,” says Antonio Ortiz-Mena, a senior adviser at Albright Stonebridge Group, a Washington ­diplomacy advisory firm, who ­previously headed the economic affairs section of the Mexican Embassy.

Even after Trump relented last spring on killing the three-way pact, some analysts expected he would direct U.S. Trade Representative Robert Lighthizer to take a hard, nationalistic line in talks on updating it. After all, in January the president had threatened a 20 percent tariff on Mexican goods to pay for the border wall. There are no such threats in the trade rep’s letter to Congress spelling out the administration’s objectives. The administration is OK with maintaining tariff-free, quota-free trade among the three countries.

True, there’s some harsh language about Nafta in the 18-page document. “Since the deal came into force in 1994, trade deficits have exploded,” it says. “For years, politicians promising to ­renegotiate the deal gave American workers hope that they would stop the bleeding. But none followed up.” Trump, it says, is finally doing what others only promised.

But that campaign-style language is confined to the introduction. What follows are mostly mainstream ideas for furthering trade liberalization, such as speeding goods through customs and ensuring that health and safety regulations aren’t ­manipulated to block imports. 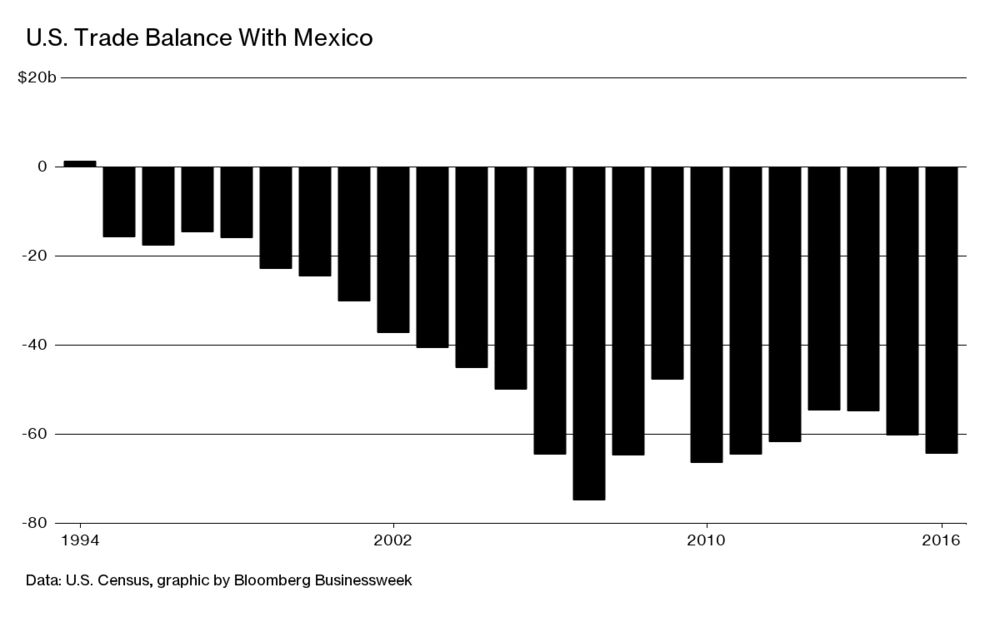 In fact, many provisions the administration is seeking in a new Nafta were negotiated into the Trans-Pacific Partnership—ironic, since one of Trump’s first acts was to pull the U.S. out of it. Among those provisions: unfettered cross-border data flows; regulatory harmonization; stronger labor and environmental standards; and a ban on currency manipulation (which Canada and Mexico don’t do anyway). “He’s taking Nafta and making it look more like the TPP but with fewer countries,” says Todd Tucker, a fellow at the Roosevelt Institute, a think tank in New York.

Canada and Mexico responded positively, with Canadian Foreign Minister Chrystia Freeland saying her country welcomed the opportunity to ­modernize the treaty to “reflect new realities” and Mexico’s economy ministry saying in a statement it “will contribute to defining with greater clarity the subjects to negotiate and the timing for the modernization process.” Congress now has a chance to shape the administration’s negotiating strategy before the talks, which will begin on Aug. 16.

Trump has frequently expressed annoyance that the U.S. runs deficits in merchandise trade with Canada and Mexico, viewing it as evidence that the countries aren’t playing fair. That ­perspective surfaces in the trade rep’s letter. The first ­objective listed in the document is: “Improve the U.S. trade balance and reduce the trade deficit with the NAFTA countries.”

That anti-deficit language worries ­free-traders, who say it’s not reasonable to expect balanced trade with each trade partner. To put it in individual terms, the average person runs a trade deficit with her auto mechanic but a trade surplus with her employer. Countries are the same: Mexico logs a trade surplus with the U.S. and a deficit with the rest of the world. Shrinking trade gaps with Canada and Mexico is “not something achievable through trade policy,” says Chad Bown, a senior fellow at the Peterson Institute for International Economics in Washington and a staff member of the Council of Economic Advisers under President Obama. “You’re inevitably setting yourself up for failure if that’s your goal.” The document, however, gives no indication that Trump is prepared to punish Canada or Mexico if bilateral deficits fail to narrow. “There is nothing that could be ­considered radical,” says Eric Miller, president of Rideau Potomac Strategy Group, a Washington advisory and lobbying firm.

In a nod to a key priority of Commerce Secretary Wilbur Ross, the document seeks to ensure that goods don’t qualify for zero tariffs unless they really do come from one of the three signatory countries. Ross has expressed concern that some products said to be made in Mexico are actually largely Chinese in content. Nafta’s rules of origin refer generally to North American content, while the letter seeks more sourcing from “the United States and North America.” The insertion of the United States into the phrase could be a way to placate nationalists in the administration.

Negotiators from all three countries are aiming to button up the treaty revisions before 2018 ­elections in Mexico and the U.S. That “may be achievable” because the countries already agreed to big chunks of the new agenda during the TPP talks, says Robert Holleyman, who was a deputy U.S. trade representative under Obama. On the other hand, he says, “this is something you could imagine being a ­multiyear exercise.”