A World in Disarray: What Role for Canada?

Already this morning, you’ve heard from some distinguished speakers on a variety of emerging issues with regard to Canada’s position in North America and the world.

I’m glad to see such a vibrant discussion about Canada’s partnerships with our North American neighbours, especially the U.S.

Canada and the U.S. enjoy a truly unique economic relationship — one unrivalled by any two countries, anywhere in the world. It starts with the more than $1 trillion (U.S.) in trade and investment between us each year. To put that in context, nearly $2 billion in goods and services — and some 400,000 people — cross the border every single day.

Already this morning, you’ve heard from some distinguished speakers on a variety of emerging issues with regard to Canada’s position in North America and the world.

I’m glad to see such a vibrant discussion about Canada’s partnerships with our North American neighbours, especially the U.S.

Canada and the U.S. enjoy a truly unique economic relationship — one unrivalled by any two countries, anywhere in the world. It starts with the more than $1 trillion (U.S.) in trade and investment between us each year. To put that in context, nearly $2 billion in goods and services — and some 400,000 people — cross the border every single day.

Now, as you know, our relationship is not always smooth sailing. Last week, the U.S. Department of Commerce released its preliminary decision on countervailing duties on Canadian softwood lumber. Our government disagrees strongly with this decision.

This is the fifth time Canada has had to defend its softwood lumber industry against U.S. claims over the last 30 years. Independent trade panels have repeatedly found these claims to be baseless.

I want to re-iterate our government’s commitment: we will take immediate action to help affected companies, workers and local communities, including by reconvening the Federal–Provincial Task Force on Softwood Lumber that Minister Carr struck earlier this year, to examine next steps.

But my focus today is an area where Canada and the U.S. have long had an exemplary partnership: energy.

Canada and the U.S. share the closest energy relationship in the world. As Prime Minister Trudeau said in Houston last month, “Nothing is more essential to the U.S. economy than access to a secure, reliable source of energy. And Canada is that source.”

In fact, Canada is the largest energy supplier to the U.S and freely supplies the U.S. with secure, reliable, and affordable sources of energy commodities.

Our energy supply source helps the U.S. meet 30% of its uranium demand, 20% of its oil, 10% of its natural gas, 2% of its electricity demand and growing.

With the third-largest crude oil reserves in the world, Canada provides the United States with 43 percent of all the crude it imports.   Alberta alone sends 2.5 million barrels a day to the U.S. Some 86 different pipelines criss-cross our border.

No fewer than 34 transmission lines cross our border in a truly integrated grid, and Canada supplies more electricity and uranium to the U.S. than any other country.

This energy integration benefits both our countries by increasing our energy security, lowering energy and capital costs, and enhancing reliability of supply.

And our relationship is evolving, as our two countries are working together on clean energy.  For example, harmonizing our energy-efficiency standards has lowered operating costs for businesses and helped to create an integrated market for the clean technologies that will transform traditional resource sectors and open up entire new industries.

I’m excited that the Canadian Global Affairs Institute will be exploring the evolution of Canada’s energy future in its 2017 policy paper series, which is supported by Natural Resources Canada.

This initiative will help to increase public literacy around energy issues in Canada — a much-needed contribution as we work to engage the public on how our international relationships and the ways we make, move and use energy will need to change in order for us to meet our climate change goals.

To engage Canadians in making these changes, Minister Carr recently launched the Generation Energy dialogue, a national discussion about our energy future.

We need to have this conversation now, because the shift to a low-carbon future is already underway. It is being driven by global momentum to address climate change and seize new and emerging economic opportunities.

Canada is proud to be one of the 195 countries that signed the Paris Agreement and to have subsequently brought First Ministers together in December 2016 to announce the Pan-Canadian Framework on Clean Growth and Climate Change. It is an ambitious agreement to meet our 2030 climate change target by reducing emissions, spurring innovation, adapting to climate change and creating good, middle-class jobs across the country.

We’re seeing more electric vehicles on the road and more renewables across the energy landscape.  A shift from coal to non-emitting electricity sources like hydro and nuclear.

And our government is committed to nurturing this transition — with significant new investments to support and promote Canadian ideas for clean energy and technology.

The budget we introduced in March is filled with those investments and that it’s been called the “Innovation Budget” in many quarters.

And it targets clean technology and clean resources as two of six economic sectors where Canada has the potential to be a global leader.  The other four, by the way, are advanced manufacturing, the digital world, bio-sciences and agriculture and agri-food.

We believe that a new generation of Canadian innovators and entrepreneurs is ready to tackle the challenges of this clean-growth century.  And it starts with energy, both traditional and renewable sources, because the way we produce and use energy in Canada accounts for more than 80 percent of our country’s greenhouse gas emissions.

International experts agree that oil and gas are going to be needed to meet the world’s energy needs — and our own — for the foreseeable future.

That’s good news for a country like ours that is rich in those resources.  But it also poses a challenge: How do we best use our resources to usher in a cleaner future?

This government believes we have to develop our conventional sources of energy in the most environmentally responsible ways possible. And, Canadians are rising to the challenge.

For example, Canada has led the world in developing technologies to capture and store the carbon dioxide generated from burning fossil fuels.

Now, Canadians are coming up with novel ideas for putting that carbon dioxide to use, in everything from concrete and plastics to fish food and even toothpaste.

In other words, we have already begun leveraging our conventional energy to fund tomorrow’s clean-energy solutions.

That will be key to our path to success in meeting our climate change goals. But all the steps along that path are not yet clear.

We need to make choices today about the ways we make, move and use energy — choices that will shape our future.  The goal of Generation Energy is to engage Canadians in helping us make choices that reflect their values and perspectives.

The timing of this conversation is perfect, as we celebrate Canada’s 150th anniversary.

This is an ideal opportunity to look back on where we’ve been and ahead to where we must go. A chance to ask ourselves a lot of fundamental questions, such as:

What does a prosperous, lower-carbon energy future look like?

How do we keep energy affordable for families?

How do we keep our industries competitive?

What are the values that should guide us?

What goals should we strive to achieve?

And what milestones should we set to measure our progress?

While the path to clean energy will be long, its trajectory is clear.  Generation Energy is about engaging Canadians in helping us to chart that course.

We want your insights.  Your ideas and your suggestions for how to make it happen.

Then, in the fall, Minister Carr will host a two-day energy forum to discuss all the ideas we’ve heard.  Following the forum, an approach will be developed that will lay out how the Government of Canada can contribute to the work being done by the provinces and territories to create the affordable energy and innovative jobs Canadians want.

One of the greatest challenges of this generation is to build an energy future that addresses climate change while keeping energy affordable, ensuring there are jobs for Canadians, and allowing our industries to remain competitive and our resources to be developed sustainably.

I hope that many of you here today — Canadians who are actively engaged in defining a vision of Canada’s future — will join us in taking on this challenge. We will be holding a number of expert roundtables, as well as inviting Canadians to submit their ideas online through generationenergy.ca and the social media hashtag #GenEnergy.

With your help, I am positive that we can not only imagine the energy economy of tomorrow — we can help create it. 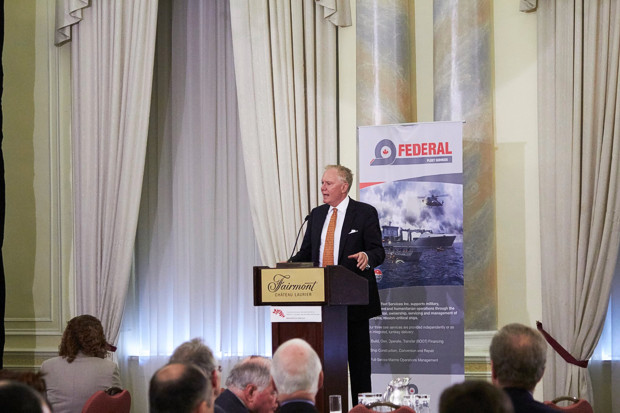 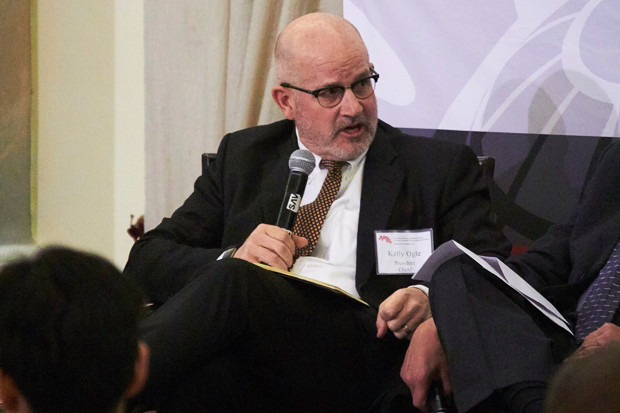 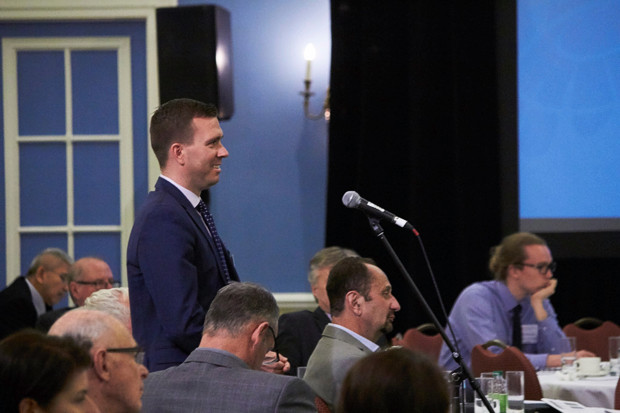 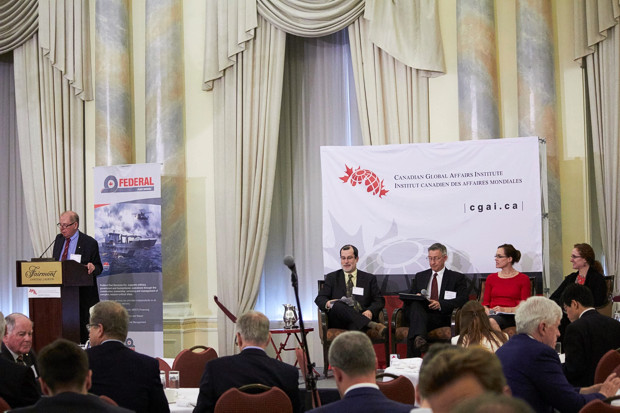 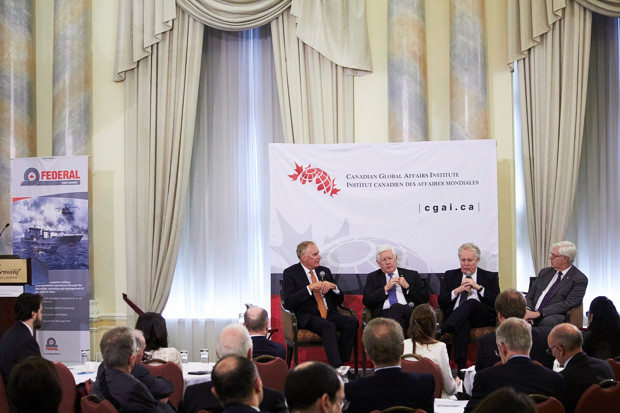 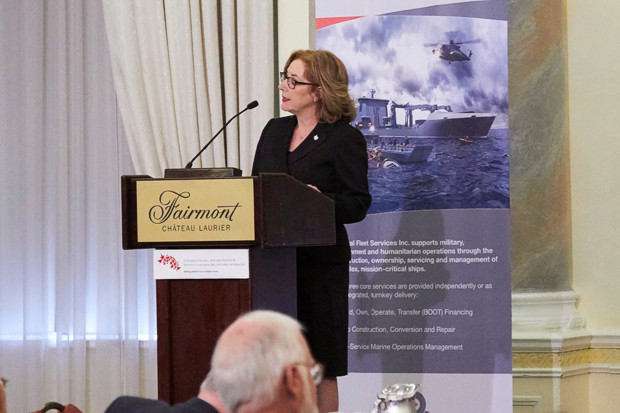 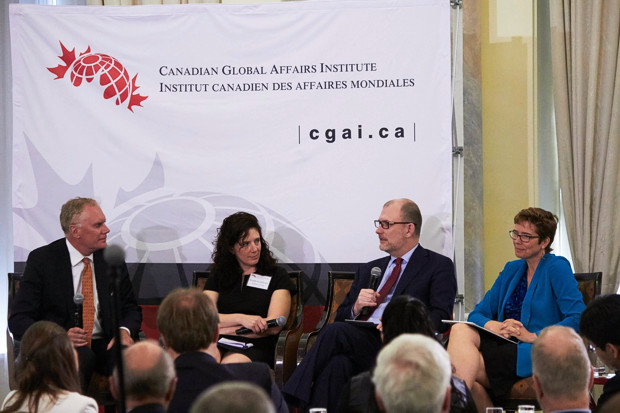 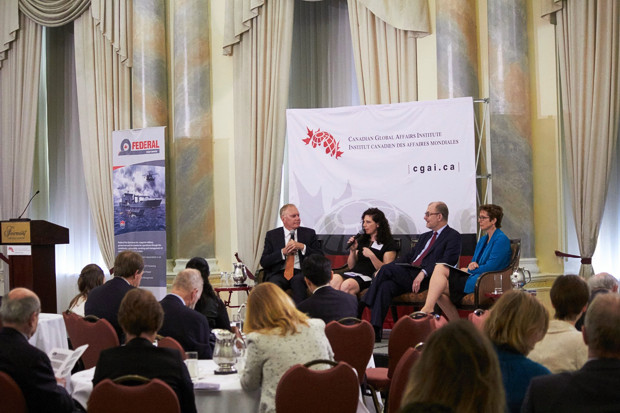 CGAI Fellow Sarah Goldfeder addressing the audience during our second panel on the future of NAFTA. 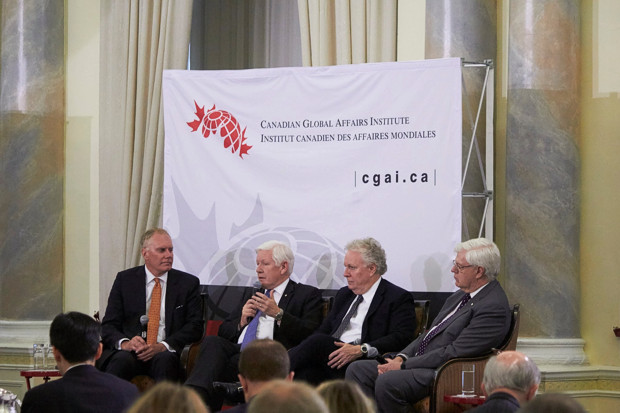 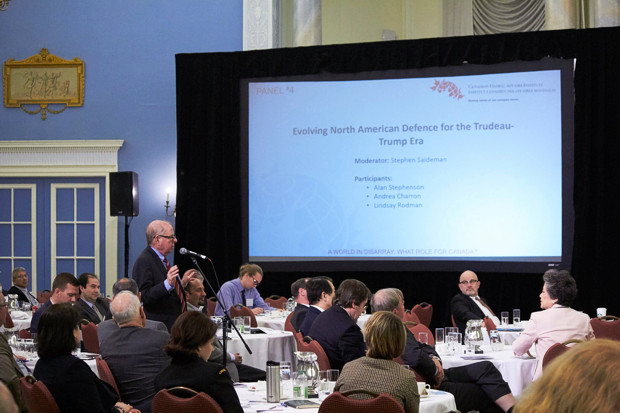 CGAI Director of Programs David Bercuson asking a question to our fourth panel of the day. 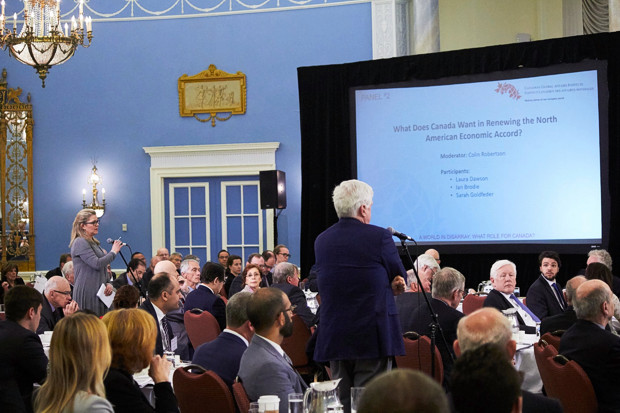 Multiple questions being asked to our second panel on NAFTA, including one from Chris Waddel, a member of the CGAI Advisory Council. 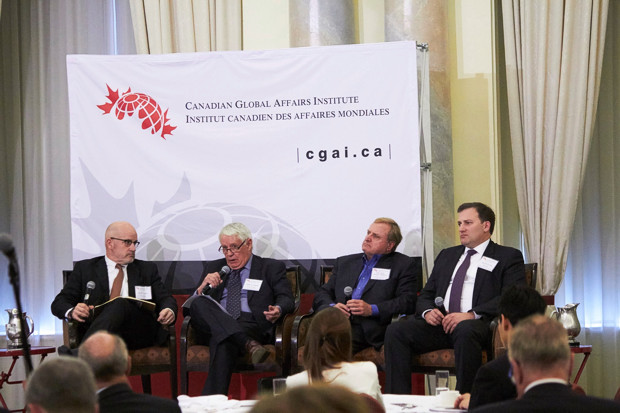 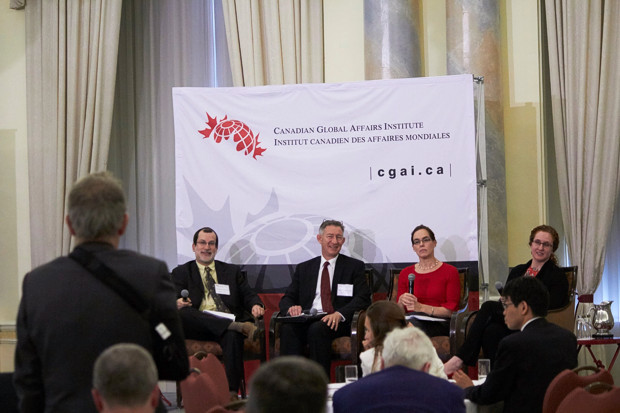 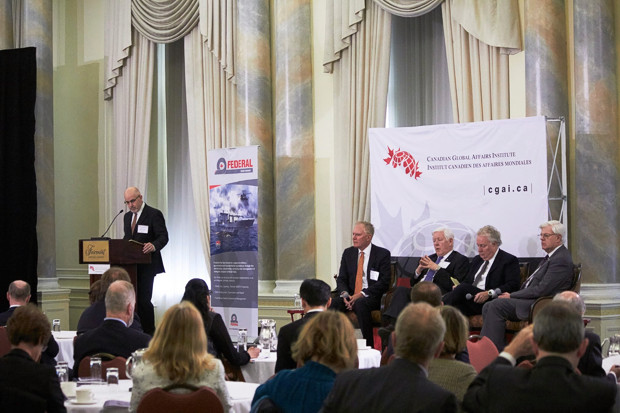 CGAI President Kelly Ogle opening the conference and welcoming the first panel to the stage. 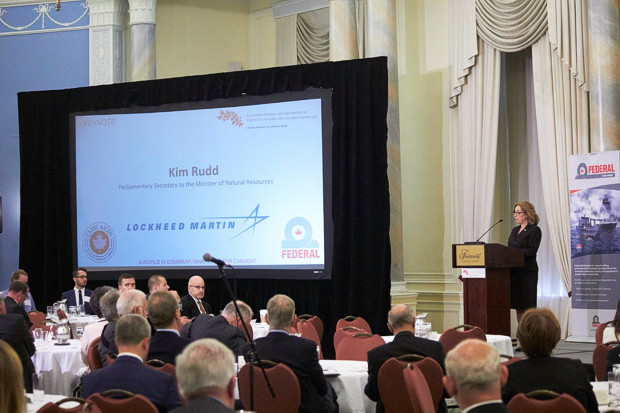 Parliamentary Secretary to the Minister of Natural Resources, Kim Rudd, addressing the audience during her keynote speech. 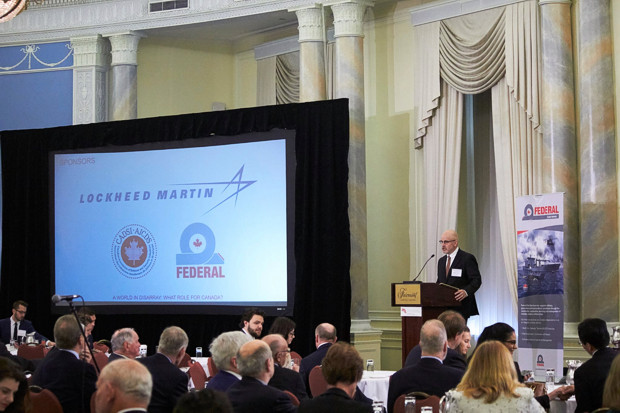 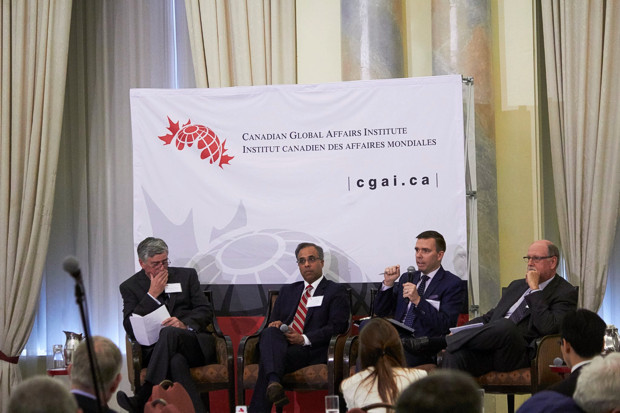 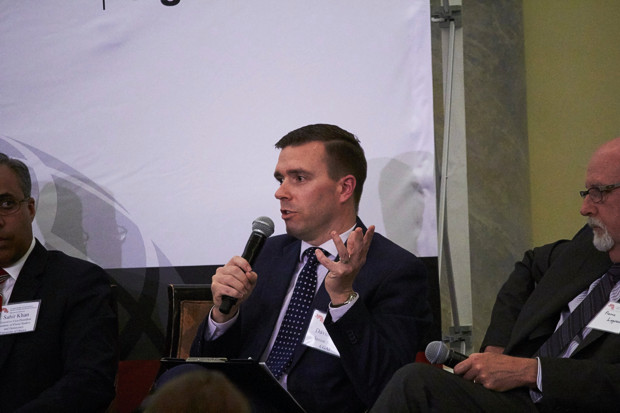 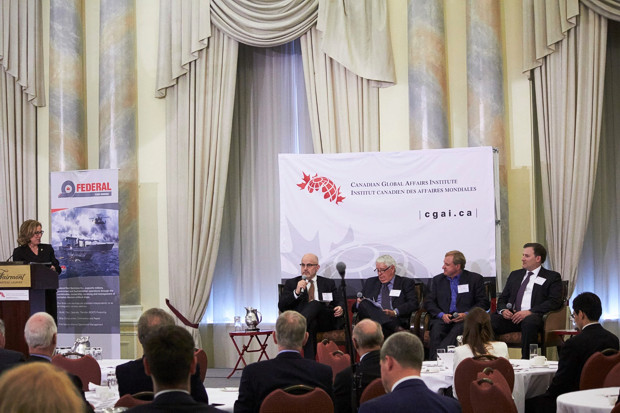 Parliamentary Secretary to the Minister of Natural Resources, Kim Rudd, introducing the participants and moderator for panel three of the day on Canadian energy development. 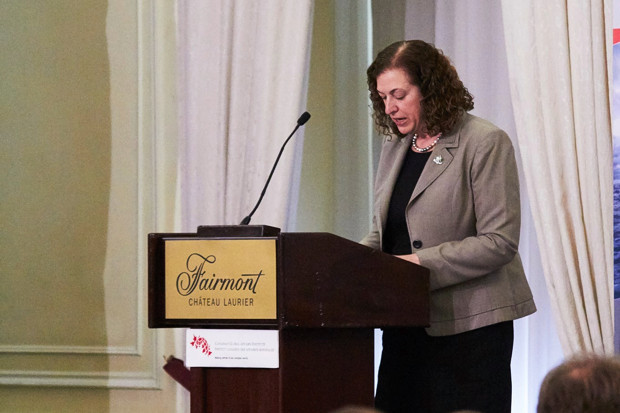 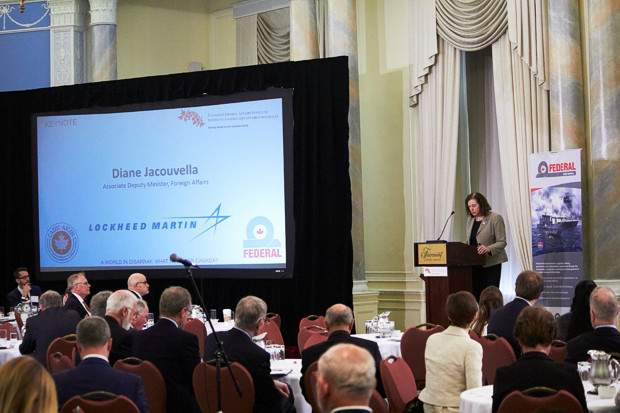 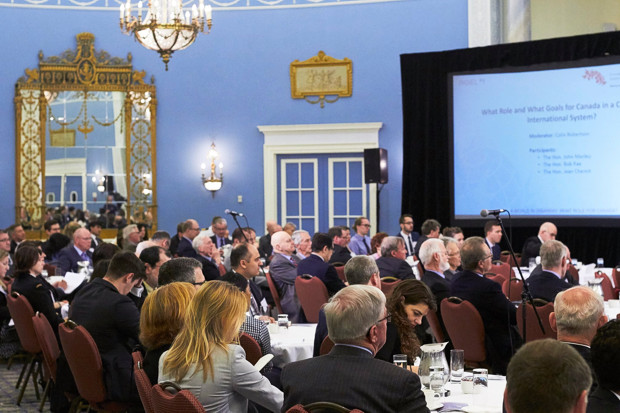 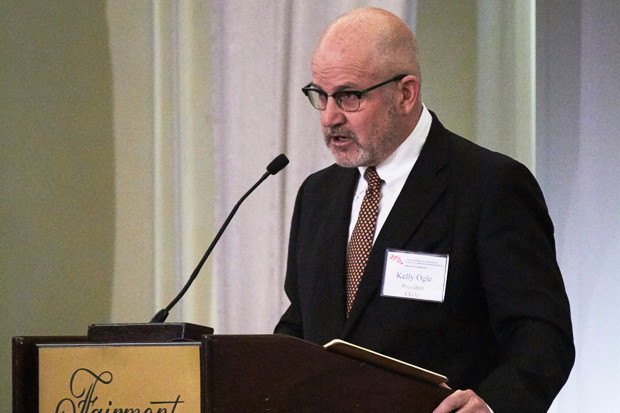