President Donald Trump’s first foreign trip is nearly over. Some events were near disasters; some went surprisingly well. But nearly all of them were deeply revealing about Trump, saying something important about his administration’s policies and his own diplomatic style.

The trip also generated some fairly astounding images: Trump grabbing a giant glowing orb in Saudi Arabia, bizarrely aggressive handshakes between the presidents of France and the United States, or the look on Benjamin Netanyahu’s face when Trump blurted out a state secret in a Q&A with reporters.

As it happens, many of these images point to the broader important takeaways from the trip. They show that while Trump’s foreign policy has become more conventional in certain ways — cozying up to America’s traditional Arab partners in the Middle East and toning down his anti-Islam rhetoric — his essentially Trumpiness still can create potential to create serious headaches in US foreign policy. That happened both through novice mistakes like accidentally revealing classified knowledge about Israeli intelligence and refusing to make an ironclad commitment to NATO.

So here’s a review of Trump’s trip, told through the lens of its seven most unforgettable moments.

When the picture came out on Sunday, it blew up on social media with the obvious pop culture references. The obviously correct one, for my money, is the palantír from Lord of the Rings.

Trump was actually attending the opening of Saudi Arabia’s Global Center for Combating Extremist Ideology, a new organization dedicated to monitoring propaganda from ISIS, al-Qaeda, and similar groups. The opening was attended by more than 50 Muslim heads of state from around the world, some of whom can be seen in the background of the photo.

The Saudi royal family is well known for its opulent tastes and love of theatrics, so having Trump, Sisi, and Salman simultaneously press their hands against the glowing orb — which, if you look closely, is a globe — was just their characteristically flashy way of officially declaring the new center open for business.

But, on a deeper level, the symbolism of it is really overwhelming. This is Donald Trump — the guy who campaigned on banning Muslim immigration to the United States and replacing “globalism” in foreign policy with “America first” — literally holding a globe surrounded by Muslims.

This isn’t just symbolism. It reflects the way that Trump’s fire-breathing campaign rhetoric about Muslims being a threat — Trump literally said “I think Islam hates us” during the campaign — has given way to relatively toned-down language and policies that basically continue those of the Obama administration. His much-ballyhooed Islam speech in Saudi Arabia ended up being surprisingly moderate, even arguing that Islam wasn’t responsible for the actions of extremists acting in its name, a point often made by both Obama and former President George W. Bush.

Trump’s attacks on “globalism” have also largely disappeared. He hasn’t pulled the United States out of the Middle East, international organizations, and major trade agreements. He’s mostly has basically maintained the pre-Trump status quo, and even leaned into it at times (like when he bombed Assad).

In terms of metaphors for all of this, holding a giant glowing globe with a group of Muslim leaders is almost too on the nose.

The old Donald Trump isn’t completely dead: He showed up in Brussels and delivered a speech to the assembled heads of state of other NATO allies. A good chunk of it — roughly two minutes — was devoted to hectoring them for not spending enough on their militaries.

“NATO members must finally contribute their fair share,” Trump said. “Over the last eight years, the United States spent more on defense than all other NATO countries combined.”

This was a touch awkward, given Trump’s tense relationship with the Western alliance. And you can see it when you watch the uncomfortable, pained looks on the faces of the leaders of America’s allies. The screenshot above shows some of the reactions, most notably the grimace on the face of French President Emmanuel Macron (on the left). But the full video is worth watching to see everyone else’s reaction

Now, Trump does actually have a point here. Technically, all NATO states are supposed to spend at least 2 percent of GDP on their defense budget — but only five of NATO’s 28 members hit the target. This is an issue that past US presidents, including Barack Obama, have raised at NATO summits before.

But Trump has repeatedly questioned the value of NATO in the past two years, once threatening to not defend allies that didn’t pay enough money — something past US presidents never did, as it calls into question the foundation of the alliance itself.

Most worryingly, Trump pointedly did not mention Article 5 — the provision of the NATO treaty that declares an attack on one to be an attack on all — in his speech. This strongly suggested to the allies that he cared more about allies ponying up than actually defending them.

“I think it unsettles them a lot,” Steve Saideman, a professor at Carleton University who studies NATO, told me. “I thought him saying it would not mean much since he lacks credibility, but omitting it entirely does send a strong message — [you] can't count on [the] US anymore.”

The American president isn’t the most graceful dancer. But he was surprisingly at ease when taking part in a traditional sword dance with a bunch of Saudi men in Riyadh — which, if you look at the trip, makes a lot of sense.

During the trip, Trump announced a new $110 billion arms deal with Saudi Arabia. It included advanced anti-missile defenses, helicopters, and precision-guided munitions that the Obama administration had withheld from the Saudis for fear that they might use them in their bloody war in Yemen.

Trump, as my colleague Alex Ward notes, doesn’t seem to care much about that. And it’s set the stage for a warm relationship between the Trump administration and the Gulf monarchy — especially when it comes to the challenge posed by Iran.

One of the rare issues on which virtually all members of the Trump administration agree is the need to confront Iranian aggression around the Middle East more aggressively. Though they aren’t pulling out of the Iran deal, they want to take a harder line on things like Iranian influence in Iraq. Trump made this plain in his Saudi speech, which thrilled his hosts, as they see Iran as their number one enemy in the Middle East.

Trump was dancing to more than one Saudi tune in Riyadh.

For most of the trip, Trump avoided his characteristic gaffes — his habit of saying something deeply offensive or wildly inappropriate off the cuff. But there was one moment, during the Israel leg of his trip, where he really stepped in it.

You’ll recall that, last week, it came to light that Trump had accidentally revealed the fact that the US was getting valuable information about ISIS from a sensitive source during a meeting with Russian Foreign Minister Sergei Lavrov. The information was specific enough that it would have been easy for the Russians to identify the spy in question, who was an Israeli asset, potentially blowing their cover.

The US government never officially confirmed the country whose asset Trump compromised. But then, when fielding press questions with Israeli Prime Minister Netanyahu, Trump somewhat backhandedly acknowledged it.

“Just so you understand — I never mentioned the word or the name Israel in conversation. Never mentioned it,” he said. Netanyahu’s face, as you can see in the above screenshot, froze in a rictus of uncomfortable horror.

The issue is that, except for Trump, no one had ever alleged that the president had said the word “Israel.” Rather, it’s that he was giving the Russians enough information to identify the spy as Israeli. But by using the word “Israel” there, he seemed to be saying that he knew the spy to be Israeli, thus confirming publicly (for the first time!) that the press reports about the spy’s identity were true.

Everything about this photo at the Vatican is bonkers. Trump’s childlike grin, Melania and Ivanka’s funereal outfits apparently inspired by a literal Dolce and Gabbana ad — and, of course, Pope Francis’s grumpiest of grumpy faces.

A lot of people read this as Francis being unhappy to meet the president. That might be a little unfair: The Pope makes this particular grumpy face a lot in pictures. Wags on Twitter who found other examples took to calling it “resting pope face,” a reference to a phrase you might have heard of.

Regardless of the Pope’s facial expression, it’s clear that there was some real tension between those men. For one, the pope gifted Trump a copy of Laudato Si, an encyclical of his exhorting the world to take action on climate change. Trump is currently busy dismantling Obama’s Clean Power Plan at home.

The tension between the two men goes back a long time. As my colleague Sarah Wildman recounts:

During the presidential campaign, the Pope — who is revered for his deep humility and sincere affinity for the poor and downtrodden — was cutting about Trump’s plan to build a border wall with Mexico. “A person who thinks only about building walls, wherever they may be, and not building bridges, is not Christian. This is not the gospel,” Francis said in February 2016. Trump fired back via Facebook:

“If and when the Vatican is attacked by ISIS, which as everyone knows is ISIS’s ultimate trophy, I can promise you that the Pope would have only wished and prayed that Donald Trump would have been President.”

It’s easy to forget, but the pope is an extremely influential political leader. With about 1.2 billion Catholics worldwide, many of whom see the pope as a vital source of spiritual and ideological guidance, that’s not someone you want to be challenging your policy ideas. Yet the pope seems primed to do just that to Trump.

6/7) The world’s most awkward handshakes 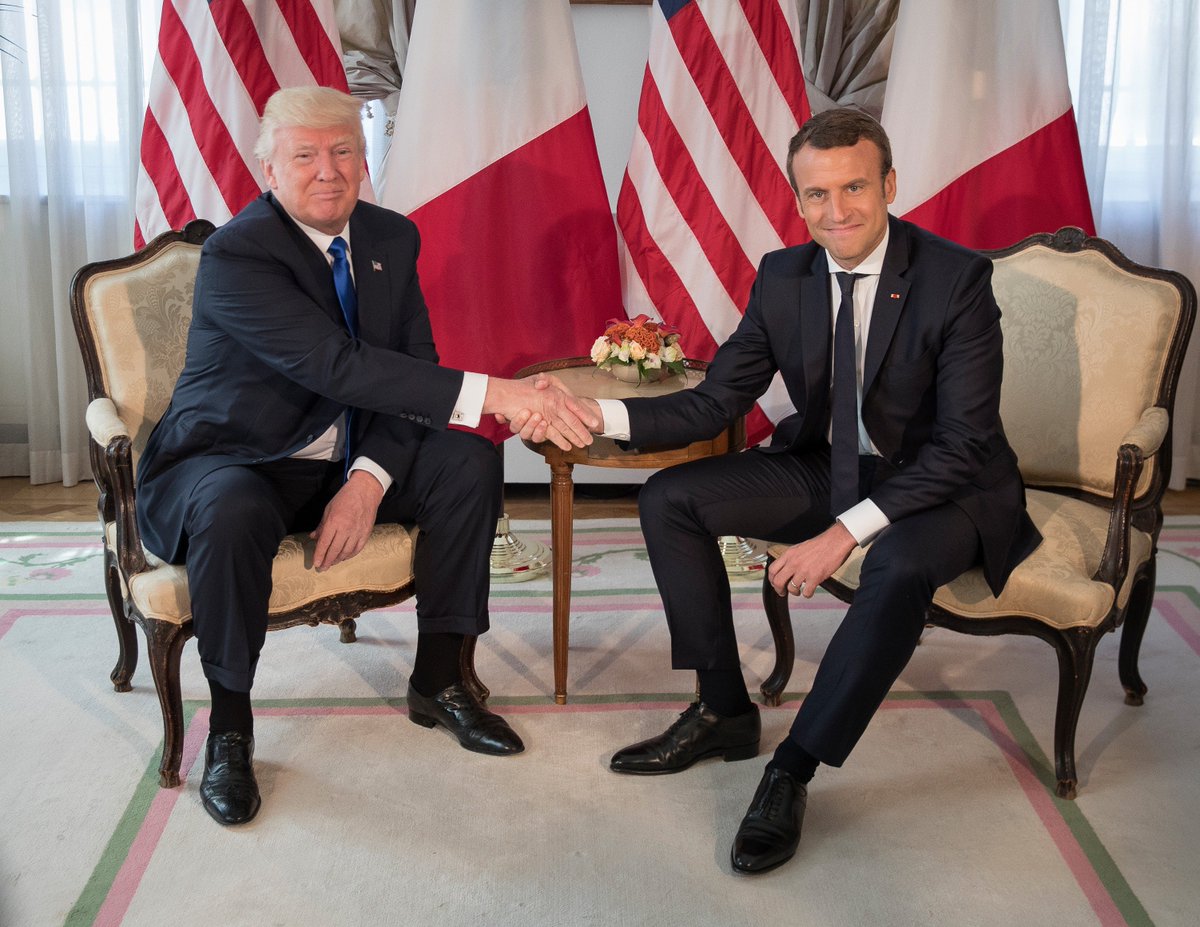 In the above photo and GIF of Trump’s handshakes with France’s President Macron, you almost feel the awkwardness, as if it has a physical presence. Clearly, these two men are not comfortable with each other and have no clue how to deal.

That actually makes a lot of sense. Trump all but endorsed Macron’s opponent in France’s May election, the far-right Front National’s Marine Le Pen. In an interview with the Associated Press in April, Trump called the candidate “strongest on borders, and she’s the strongest on what’s been going on in France [a reference to Islamist terrorism].”

Candidate Macron, for his part, released two videos starring former President Barack Obama, one of which was a formal endorsement. He also released a web ad bashing Trump’s policies on climate change, even promising to give American climate scientists French visas.

“I do know how your new president now has decided to jeopardize your budget, your initiatives,” Macron says in the ad. “Please, come to France — you are welcome here.”

Clearly, these two men don’t just disagree with each other — they’ve positioned each other as opposites. Though Trump reportedly tried to smooth this over by telling Macron he always wanted him to win, it clearly didn’t take.

That could cause serious problems down the road. Far-right parties, as of right now, don’t have enough supporters to outright win elections. Yet Trump can’t seem to stop himself from backing them all the same. And if Trump continues to pick the losing horse in European elections, he’ll soon find himself having strained relationships with the leaders of close American allies that goes well beyond the occasional awkward handshake.

CONFERENCE
Canada in the World

Paul Martin on "The G20 Today"

Trade and security between Japan and Canada

EXPERTS IN THE MEDIA

Shockproofing Canada: Why we need a Strategic Petroleum Reserve of our own