Russian President Vladimir Putin tried to give NATO a poke on the eve of the biggest NATO war games since the collapse of the Soviet Union. He threatened to launch missiles into the middle of a 65-vessel Western naval battle group that included an aircraft carrier, assault ships and four Canadian warships.

The missile launch turned out to be a bluff but a Russian long-range reconnaissance aircraft that closely resembles a Bear nuclear bomber briefly caused consternation when it flew within 500 metres of the USS Whitney, the flagship for a four-star admiral giving orders to 50,000 NATO troops. There were also suspicions that Russia jammed GPS signals during the exercise, posing dangers for civilian as well as military aircraft in all the Nordic countries.

The alliance regards Exercise Trident Juncture as a test of its tactics and inter-operability and, perhaps most important of all, the logistics of getting soldiers, sailors and air crew together in what is already winter on the Arctic Ocean and in the mountains and valleys of northern Norway.

Citing Russia’s 195 kilometre-long land border with Norway, Moscow regards having so many U.S.-led war fighters on its doorstep as a provocation and has said so repeatedly. Particularly galling for Putin is that Finland and Sweden, who do not belong to NATO but are deeply worried about Russian machinations in and near the Baltic Sea, participated in what has become a 31-country jamboree.

Russia accepted an invitation to send military observers to Norway, but did not allow observers from NATO countries to witness much larger exercises that it held this year in western Russia and near the Chinese border.

“Putin is entitled to his opinion but NATO is a defensive construct and this exercise is very open,” said Brig.-Gen. Dave Anderson, who is responsible for readiness at Canadian Joint Operations Command and the senior Canadian officer in Norway. “There are multiple audiences here but the most important one is NATO itself.”

While not mentioning Russia’s annexation of Ukraine or the war it has backed in eastern Ukraine, Anderson added: “There is no doubt. The world has changed a lot in the last 40 or 50 years. We must respond to the world not how we might wish it to be, but how it is.

“Our military was re-oriented for the counter-insurgency in Afghanistan. What we have here is training for a combat operation against a near-peer enemy no matter who that adversary is. It makes perfect sense to respond to the stimulus of the world.”

For the Canadians, Norwegians, Finns and Swedes, training in temperatures as low as -20 C is nothing special. However, the exercise has been a chance for 4,000 Marines, mostly from the southeastern U.S., and troops from southern Spain and Italy, to get used to fighting in the cold, ice and mud. Hypothermia and that old soldiers’ plague, trench foot, have been particular concerns.

The gathering has been a serious test for Marine logistics. Half of its winter gear, tanks and armoured personnel carriers were hauled out of three caves hidden in the Norwegian mountains where they have been pre-positioned and kept in good working order for years by the Norwegians.

“We haven’t done this at this size for 30 years,” said Maj.-Gen. Dave Furness, commander of the Marines’ 2nd Division. He last trained in Norway as a rifle platoon commander in the 1980s before the focus of U.S. and allied forces switched from preparing for war in Europe to fighting jihadis in Afghanistan, Iraq, Syria and the Horn of Africa. “We are principally here to show that we can get here, assemble a force and be part of an Arctic or Scandinavian operation.” 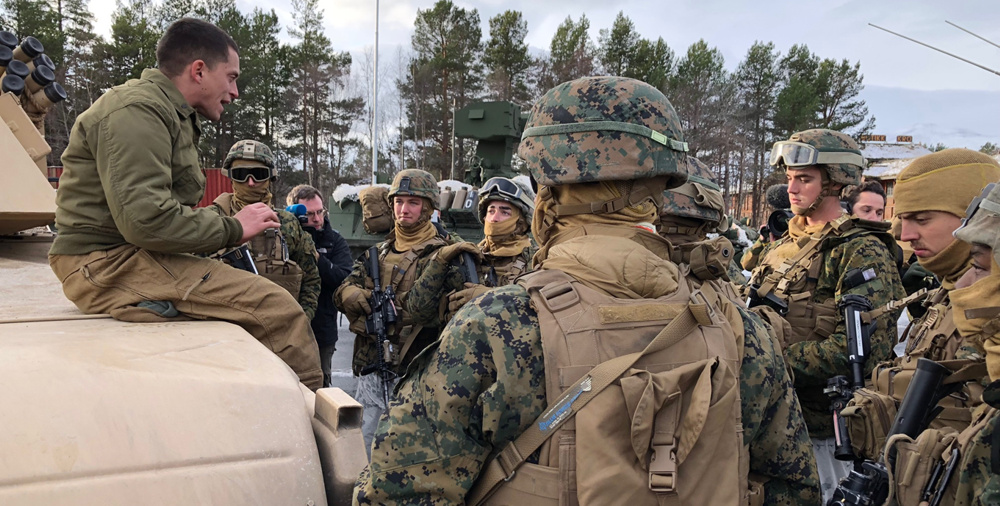 Unlike in South Asia and the Middle East, the Marines and their allies face a potent air threat from Russia as well as new technologies that encourage electronic warfare and cyber-war.

This is Canada’s return to Europe a century this week after it celebrated the end of the First World War and 27 years after it closed its Cold War bases in Germany. Yet Canada’s robust presence here has barely been mentioned by anyone in Ottawa. With 2,000 troops forward deployed, this has been by far the biggest, most complex military operation for the Canadian Forces since the Afghan combat mission ended seven years ago. It is a throwback to the ’70s and ’80s when NATO tasked a brigade from Canada with coming to Norway’s aid at a time of war.

At a cost of $28 million, Canada has sent the fourth largest national contingent to Norway. As well as warships, it has contributed eight CF-18 Hornets, an aerial refuelling tanker, a spy plane and a ground combat element built around 3rd Battalion, the Royal 22nd Regiment.

“I would suggest this is a pretty formidable force,” said Anderson, who has served in Afghanistan and Iraq as well as at the Pentagon. “What we have here from Canada is a likely first response to an Article 5 situation” which says that an attack on one member of NATO is an attack on all that demands a collective response.

The Canadians have proven in Norway that “we have retained the ability to project power at the speed of relevance,” he said.

Figure 2: Near Oppdal, Norway - Somewhat incongruously, a pair of 68 tonne U.S. Abrams tanks prepare to launch an offensive from a motel parking lot in a realistic simulation of what fighting would be like if NATO ever has to go to war on its northern flank. (Source: Matthew Fisher)

Doing so had been a stiff test for Canadian logistics. About 170 sea containers and 80 vehicles were brought over by ship. There have also been many flights using massive C-17 cargo aircraft and 10 chartered commercial flights to move personnel. There have been plenty of civilian regulations that it has to abide by, too.

“We knew, for example, that the Norwegians would not accept any wood unless it was treated with a certain disinfectant,” said Lt.-Col. Todd Anstey, who, as the leader of the National Command Element for 1st Canadian Division in Kingston, oversaw the implementation of plans that Anderson and his staff prepared. “It has to be washed to a Norwegian standard. Hundreds of hours were spent preparing the vehicles.”

At every step of the way Norwegian communities were involved in talks about the huge number of troops and heavy vehicles that would clog the country’s limited northern road network and narrow valleys.

To prepare for what was described as the Battle of Oppdal, the mayor, Kirsti Welander, said special consideration had to be given to protecting her community’s 50,000 sheep as well as the reindeer that graze nearby.

There were briefings for children and for immigrants from conflict zones such as Iraq and Somalia. In a particular Norwegian twist, the war games were halted for half an hour on Sunday so that troops could attend open-air church services.

“My impression is that people have been excited and curious,” Welender said. “I have not heard one negative voice.”

Gro Albo, who works in the local agriculture office, thought “it was very good for NATO to see the snow and feel the cold. If there is a real war it could be like this. My mother is 86 and remembers the German occupation. She is happy that NATO has come.”

The Canadians were given a particularly difficult strip to attack and defend. With them for the fight at altitudes ranging from 200 metres to 1,600 metres were French commandos and Bulgarian troops responsible for relations with the Norwegians. This force was opposed by a battalion of Italian paratroopers reinforced by French combat engineers.

To the west of the Canadians were U.S. Marines. To the east were Norwegian armoured units. The Norwegian Home Guard, which is a local militia made up mostly of farmers, provided intelligence.

“There are no kids here to take to day care or hockey practice. Our job is to fight. There is no other task,” said Lt.-Col. Frédérick Côté, the Van Doos’ commander. “Snow doesn’t worry us. Sleet and mud do.”

A veteran of two tours in Afghanistan, Côté said only about one-quarter of his troops had been in South Asia.

Another Afghan vet, Col. Stephane Boivin, who commands the 5th Mechanized Brigade in Valcartier, Quebec, which includes the Van Doos, said his force was very stretched out at the moment with troops in Niger, Mali and Iraq. Still, being a significant part of the war games in Norway was a top priority.

“The government of Canada is paying very, very close attention to this,” Boivin said. “Their interest is not only in the exercise but our ability to deploy. We want to show our support for NATO. I certainly think the Russians will be paying attention. We cannot expect less of them,

With the Finns and Swedes here, too, I am sure they are not so happy. But the Swedes were with us in Afghanistan and Mali. The world changes.”

Matthew Fisher is a Fellow at the Canadian Global Affairs Institute. He was born in northwestern Ontario and raised there and in the Ottawa Valley. He has lived and worked abroad for 34 years as a foreign correspondent for the Globe and Mail, Sun Media and Postmedia. Assignments have taken him to 171 countries. An eyewitness to 19 conflicts including Somalia, the Rwandan genocide, Chechnya, the Balkan Wars, Israel in Gaza and Lebanon, the two Gulf Wars and Afghanistan, Matthew was appointed as the first Bill Graham Centre/Massey College Resident Visiting Scholar in Foreign and Defence Policy in 2018.

CONFERENCE
Canada in the World

EXPERTS IN THE MEDIA