“Peacekeeping” is a term that resonates with Canadians. Prime Minister Justin Trudeau and his Liberals used it to great effect in the 2015 election, promising to undo the diminution of contributions to peace operations that occurred while the Conservatives were in power. This idea of contributing to international peace through the United Nations (UN) was explicitly restated on numerous public occasions and through policy documents, most recently Canada’s defence strategy, “Strong, Secure, Engaged,” released in June 2017. This review commenced soon after Trudeau’s election victory and contains numerous references to peacekeeping and peace operations, as well as prominently positioned photos of Canadians in blue berets and blue helmets. For many Canadians, Trudeau’s aspirational catchphrase “We’re back!” led to a belief that the Canadian Armed Forces (CAF) would take a rejuvenated and robust role in UN operations. This would include the deployment of combat units in peacekeeping roles to conflict regions, like the Central African Republic and Mali. However, in the last few months this political rhetoric has lessened. The recent 2017 UN Peacekeeping Defence Ministerial conference, held in Vancouver, resulted in an apparent volte-face to these previous ambitious promises. Despite that, one can argue that the assurances which have emerged as a result of this conference may be more pragmatic and versed in the nuances of domestic realpolitik than many would normally attribute to the current Liberal government. However, while this approach may resonate with a national audience, it is seemingly at the expense of meaningful contributions to international peace and security.

At the Vancouver conference, which consisted of over 500 delegates from 80 countries and five international organizations, Canada affirmed support for future peace operations. Along with other contributing nations, agreement was reached to provide: (1) “smart pledges,” moving away from traditional force contributions to providing high-demand or niche capabilities, (2) contributing to international peacekeeping through training assistance, and other initiatives for capacity building, (3) protecting vulnerable populations by assisting with comprehensive strategies aimed at strengthening fragile societies, stemming gender-based violence and ethno-cultural strife, and (4) increasing effectiveness in generating and deploying peacekeeping capabilities. The Vancouver conference was also notable for one other – and possibly more important – evolution for peacekeeping, which was the Vancouver Principles respecting the protection of civilians, particularly children. Following from these discussions Trudeau announced:

The nature of conflict has changed. So too have the demands of peace operations. Discrete offerings and one-off commitments have gotten us this far, but we won’t be able to deliver true, transformative change without a real institutional change. Canada is prepared to help lead that charge. To rethink how we engage, not just where we engage. To close the institutional gaps that prevent us from being even more effective agents of peace in a world that sorely needs it. That’s how we’ll protect the world’s children, empower women and girls, and build a more peaceful and a more prosperous world.1

Most importantly, this statement, unlike the dialogue that took place over the last few years, seems to recognize the changed nature of peacekeeping. In the post-Cold War world the conflicts are no longer the interstate wars of the early UN missions but are more intrastate in nature, involving a multitude of participants, not just recognized governments. Military forces must be structured to enforce and maintain peace. Roles have expanded from simply providing for the monitoring of an established peace to creating peace; building sustainable institutions of governance; human rights supervision; security sector reform; disarm, demobilize and reintegrate (DDR) and even assisting with development of all types. Also, due to the difficulty of facilitating sustainable peace processes acceptable to protagonists, violence in these conflict regions tends to be constant and long-running with any respite temporary, even in areas containing longstanding UN peacekeeping missions. For example, UN forces have been involved in the Congo since 1960, with the latest iteration, the Mission de l’Organisation des Nations unies pour la stabilisation en République démocratique du Congo (MONUSCO), having no foreseeable end. Thus, to promote peace and security in these troubled regions requires concrete international action using a variety of mechanisms – not just military – aimed at achieving tangible objectives. 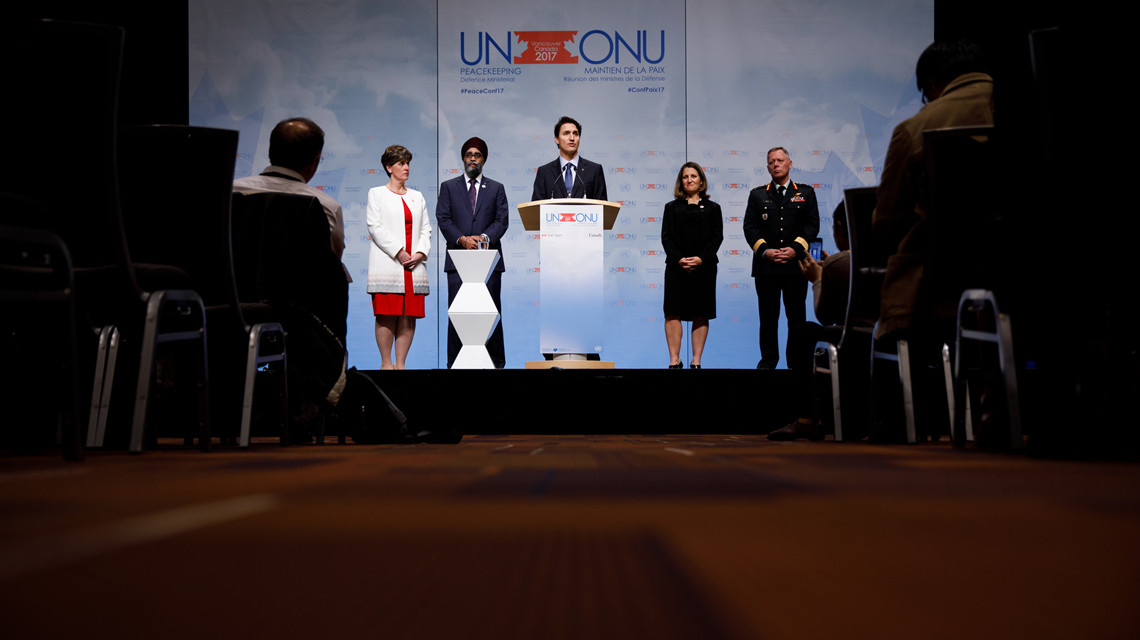 At the Vancouver conference Canada promised limited tactical airlift support to assist UN missions with military and transport needs, a small aviation task force of medium lift transport and some armed utility (general purpose) helicopters, and a quick reaction force of about 200 military personnel. Canada also agreed to assist with new training initiatives for capacity building in peacekeeping, including support for implementing the Elsie Initiative for Women in Peace Operations. This proposal, named after Canadian women’s rights pioneer Elsie MacGill (1905-1980), is aimed at creating new ways to assist UN states and others to effectively and meaningfully integrate larger numbers of women in peace operations. 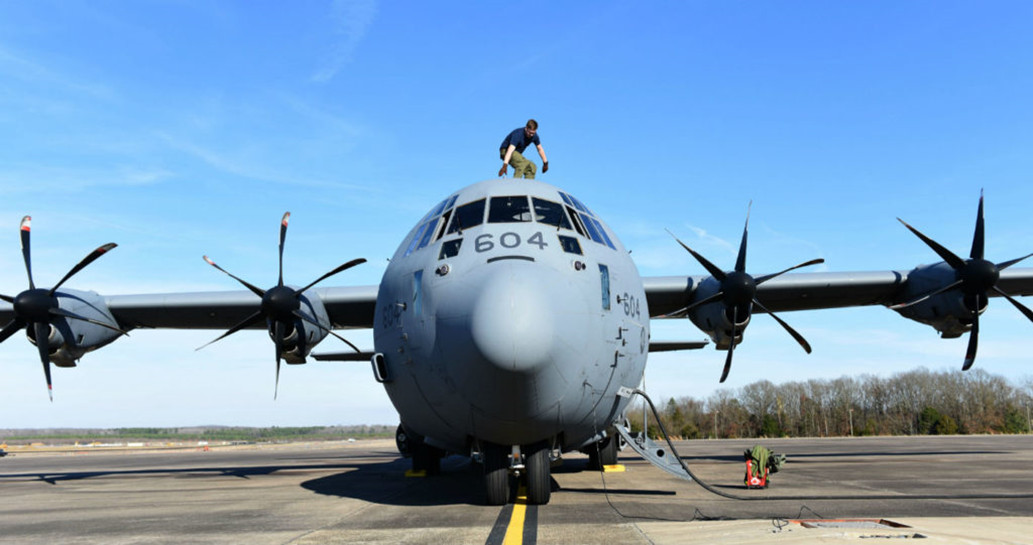 Figure 2: A CC-130J Hercules cargo aircraft operated by the Royal Canadian Air Force. The Canadian government's new peacekeeping plan to offer cargo aircraft such as this to the United Nations for future peace-support operations. (DND)

For a party and prime minister who – although still ahead in the polls – are experiencing a decline in popularity, the Vancouver conference offered an opportunity to renew domestic approval ratings by addressing specific issues that appeal to their Canadian supporters.2 While discussions of gender equality and other similar topics are philosophically and ethically appealing, they do not address the fundamental needs of 21st century peace operations in violent conflict and post-conflict regions. In order to enhance the effectiveness of UN military operations, member nations need to provide contributions in the form of units capable of implementing peacekeeping mandates and critical military capabilities that enable the conduct of peace operations activities. These latter capabilities include such things as communications, medical, logistics, aviation and air support. From a larger perspective, these forces need to be coupled with diplomatic, development and other initiatives that will solidify and strengthen fragile societies. Canada’s military offerings are limited to a relatively small aviation contribution, likely a few transport aircraft and a number of medium and general purpose lift helicopters, neither of which has the offensive capabilities of an aviation platform like the general purpose Black Hawk. This American-built helicopter can use a wide range of offensive munitions and provides a greater general purpose capability than the Canadian equivalent, the Griffon, which is widely viewed as lacking lift capability and under-armed. On top of that, a quick response force of 200 has limited utility, and will undoubtedly be used in more stable UN missions with lower levels of risk.

Increasing peacekeeping capacity is not a new initiative. Canada has assisted with peace operations training in other countries since 1996 with the establishment of the Peace Support Training Centre (PSTC) in Kingston, Ontario. The PSTC has been mandated to not only deliver pre-deployment peace operations training but also to provide peace operations training assistance to Canadian and other foreign organizations. The PSTC increases foreign peace operations capacity through active participation in foreign and domestic conferences, dispatching instructors to other countries to support their training and build capacity, and training foreign instructors and students in Canada. The training they provide is closely linked to government of Canada objectives, and reflects both UN and North Atlantic Treaty Organization (NATO) requirements. A small unit of about 60 personnel, which utilizes significant Canadian army augmentation in support of its courses, the PSTC provides enormous joint institutional capacity, far outweighing its size. Interestingly, while capacity building is highlighted in the Vancouver conference announcements, tangible funding and expansion of this little-known institution were not explicitly mentioned.

Examining government announcements made in the wake of the UN Peacekeeping Defence Ministerial conference, one can recognize that these contributory promises will resonate with Liberal supporters and perhaps increase popularity in current domestic polls. However, from the international perspective these assurances provide little real impact. Effective UN peace operations in the 21st century require robust forces and capabilities able to operate in a sustained fashion to create peace in unstable environments. These military forces need to be paired with corresponding non-military initiatives and funding packages that allow for the construction of peaceful institutions upon a foundation formed by military intervention. While proposals and programs, such as the Elsie Initiative on Women in Peace Operations, are laudable, they can only be truly effective if supporting vigorous actions taken to establish a durable and lasting peace. If Canada wishes to be taken seriously internationally and within the UN, she will have to up the ante. Only by providing the necessary military forces or capabilities, coupled with supporting non-military activities needed to tangibly resolve the dilemmas that war-torn regions pose, will Canada be perceived as a team member, instead of a bystander spectating from the sidelines.3

3 I would like to thank Major-General (Ret’d) Terry Liston, Colonel (Ret’d) Brett Boudreau, Major Chris Sullivan, journalist Matthew Fisher and Lindsay Coombs for their suggestions and review of this article.

Howard G. Coombs is an assistant professor and associate chair, war studies, at the Royal Military College of Canada, in Kingston, Ontario.