How to debate immigration issues in Canada

The positions taken in the immigration-levels debate are often paralleled in other issues: the extent to which we should privilege economic immigrants compared with family members and refugees; how easy or hard it should be to acquire citizenship; and what degree of accommodation is reasonable for minority cultures and religions.

Determining the appropriate level of immigration based on economic conditions and the country’s capacity to support integration is a legitimate goal for a necessary conversation, given its importance to Canada’s ongoing prosperity and well-being. However, many are reluctant to have this conversation because of its association with xenophobia. How we engage with each other is as important for social cohesion and inclusion as the substance of the issues themselves.

Let’s look at a few of the voices on both sides of the debate about appropriate immigration levels.

The Century Initiative, which advocates a Canadian population of 100 million by the end of the century, and the Finance Minister’s Advisory Council on Economic Growth, which called for a 50 percent increase in annual immigration to 450,000 by 2021, are among the most prominent boosters. They argue that increased immigration means greater economic and social prosperity. Industries, services and organizations that benefit from higher numbers (such as construction companies, law firms, real estate brokers and settlement organizations) echo these views. Others note that a larger population provides greater economies of scale for public and private institutions. Some academics and refugee groups argue for more family-class immigrants and refugees.

But most advocates assert economic benefits without analyzing available evidence (such as national and regional unemployment rates, and barriers to employment for immigrants) or the additional investments needed for successful integration. Craig Riddell, Christopher Worswick and David Green note that available evidence shows neither a positive nor a negative impact of immigration on jobs and wages.

Those advocating for a greater share of family-class applicants and refugees in the immigration stream tend to ignore or downplay the possible risk to public support for immigration from any shift toward these classes. Public support hinges on an understanding of the economic benefits brought by immigrants, at least those selected on the basis of their ability to integrate quickly into the workplace. The longer time needed for integration of other classes of immigrants (the family class, for example) raises cost concerns. The benefits of immigration for these people are seen to lie more with the immigrants than with Canadian society as a whole.

On the other side are critics who consistently argue for more restrictive policies on immigration, citizenship and related matters. Some argue that immigration hurts the economy more than it helps. They generally focus on the assertion that current levels are overly high in relation to labour force needs; on the need for a higher proportion of economic-class immigrants, given their quicker workforce integration and hence greater economic benefits; on the impact on congestion and housing prices in urban areas; on the prevalence of immigration fraud; and on the risks to social cohesion posed by ethnic enclaves. Some critics tend to favour European-origin immigrants, given the perceived incompatibility of immigrants from other areas with Canada’s values and traditions.

The continued success of Canada’s immigration, settlement, citizenship and multiculturalism programs is central to our future. Getting the substance right requires informed policy debates and discussion, carried out in a respectful manner. For this to happen, both sides need to be more aware of their assumptions and more cautious in their assertions, and they must find better ways to present their arguments.

Here are some do’s and don’ts for engaging in an intelligent debate about immigration (tables 1 and 2). 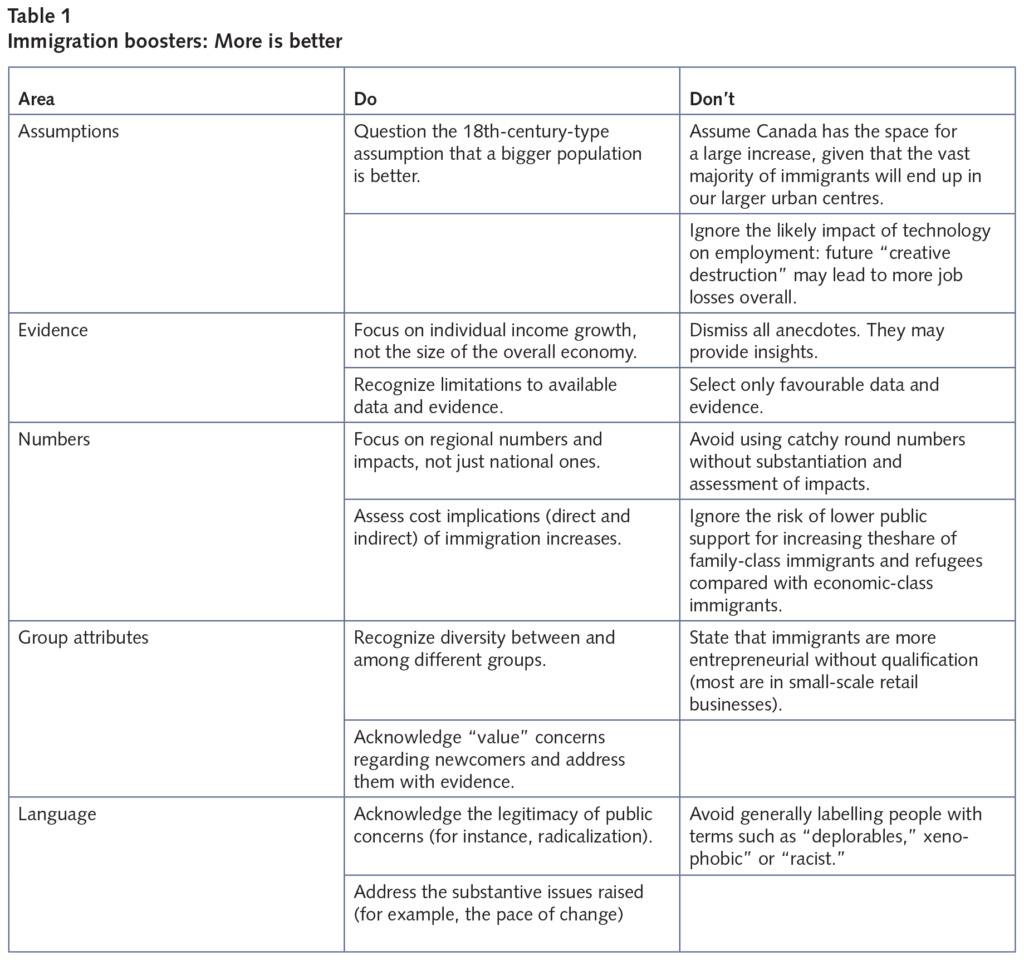 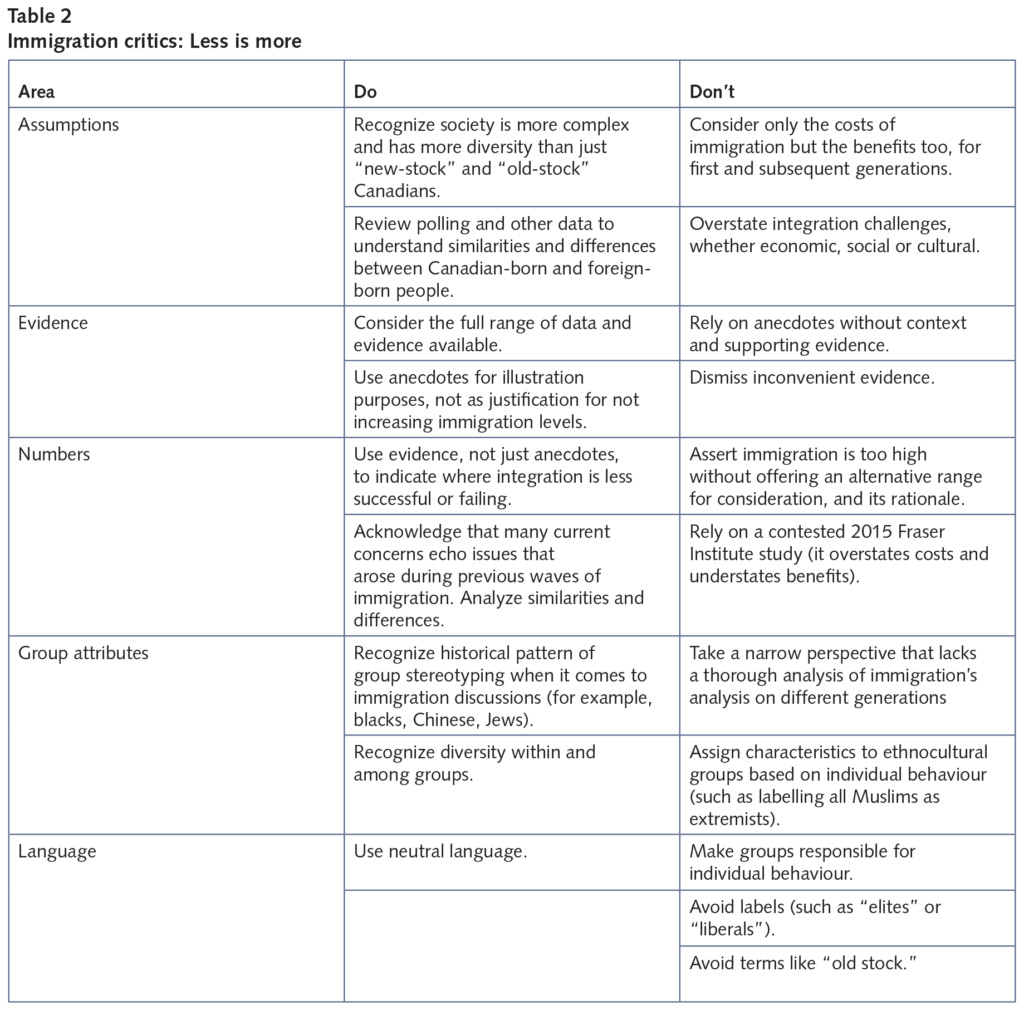 Those who support increased immigration to Canada could make a number of alternative, more nuanced arguments, while avoiding the pitfalls outlined above:

For critics, an alternative set of arguments to avoid some of the pitfalls outlined above would include:

Debate and discussion regarding immigration, settlement, citizenship and multiculturalism is normal and healthy, provided that it is conducted in a respectful and thoughtful manner. Overly simplified argumentation, too much reliance on anecdote, denial or disregard of evidence, underestimation of public concern and the use of denigrating language or tones do not help these discussions.

Canada has benefitted from the relative success of its immigration, settlement, citizenship and multiculturalism policies to date. Their continued success remains important to Canada’s future. All participants need to be mindful of the impact of their arguments and words and need to formulate their arguments in a manner that fosters informed debate and contributes toward better public discourse and policy development.