The Order of Canada and diversity

In Budget 2015, the then Conservative government announced additional funding of $13.4 million over five years and $2.8 million in ongoing funding for the Canadian Honours System. This aimed to “bring [honours] closer to all Canadians” by increasing the number of Order of Canada nominations from “under-represented sectors” (e.g. business) and regions (i.e. the West).

This was prompted by an Ottawa Citizen analysis that showed only 26 percent of recipients since the Order’s creation in 1967 came from the West, compared to the region’s 31 percent share of the population. In contrast, Atlantic Canada had 11 percent of recipients, about twice its share of the population. Moreover, the study showed an increasing percentage of awards had gone to those active in the arts while the share going to business people had declined.

It should be noted that award and recognition programs are different from employer employment equity programs and political appointments. Employers, whether private or public sector, have considerable levers available to them to increase diversity with their organizations. Governments have considerable latitude in their appointments as we have seen with the increased representation of women, visible minorities and Indigenous peoples under the Liberal government.

In contrast, award and recognition programs have fewer tools for increasing diversity, the main one being public outreach. The additional funds in Budget 2015 were used to modernize the nomination process, increase outreach to “certain regions of the country, under-represented sectors of activity, and [to ensure] a more equal gender representation.” The funding also supported various activities around the Order’s 50th anniversary in 2017.

While it is too early to assess whether these initiatives improved regional and other forms of representation, this article analyzes the over 700 Order of Canada appointments from a regional, professional background and employment equity perspective, between 2013-16. These appointments include 18 Companions, 165 Officers and 540 members of the Order of Canada. 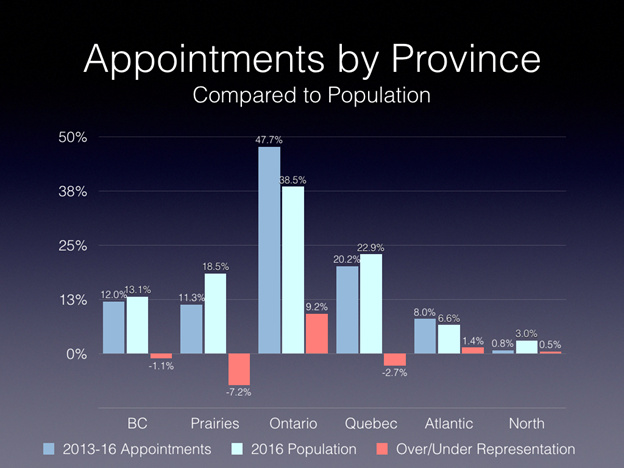 Chart 2 looks at how the regional balance has shifted during the four years in question. Western representation was particularly low in 2014 just as Ontario was particularly high, particularly in the December tranche of appointments: 5.3 percent compared to the 2013 Prairie share of the population of 18.1 percent, 56.8 percent compared to Ontario’s share of the population of 38.6 percent. It is likely that these numbers contributed to the Budget 2015 funding decision.

It’s interesting to note that recipients who spent part of their career abroad form just over three percent of recipients. This suggests that the honour is focused on Canadians who have spent most of their professional life in Canada. 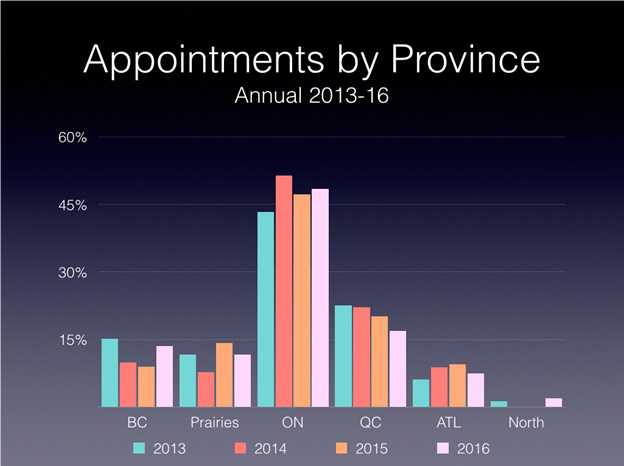 Chart 3 looks at the diversity of backgrounds of Order of Canada recipients (the definitions used can be found in the methodology section at the bottom of this article). In general, the arts, health, business and public service backgrounds dominate, with also strong representation of those with academic, activist and science backgrounds. 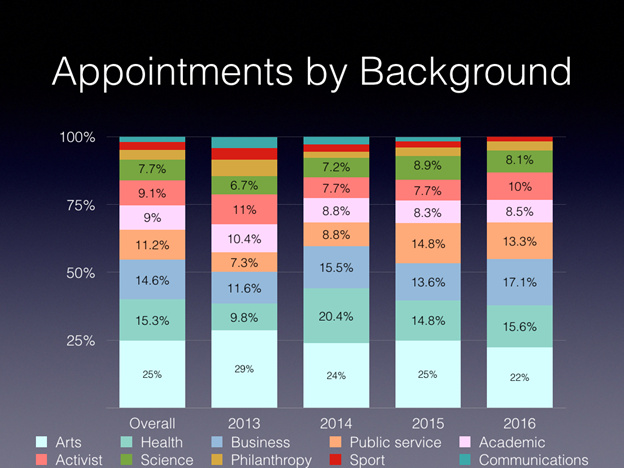 Given what was perceived by the previous government as over-representation of the arts compared to business, Chart 4 looks at how backgrounds of recipients has shifted over these four years for the top four backgrounds. There is a clear downward trend in recipients with an arts background (6.4 percent) and a small increase in those with a business background (three percent). While there is considerable fluctuation in the number of recipients with backgrounds in health care, the percentage nevertheless increased from 9.8 to 15.6 percent, as well as there being an overall increase in public service recipients from 7.3 to 13.3 percent. 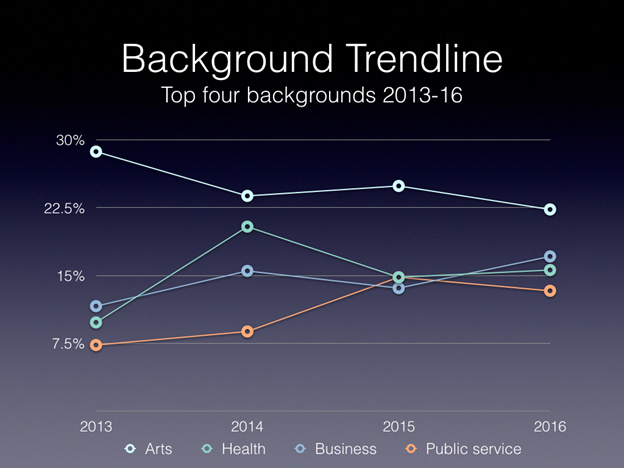 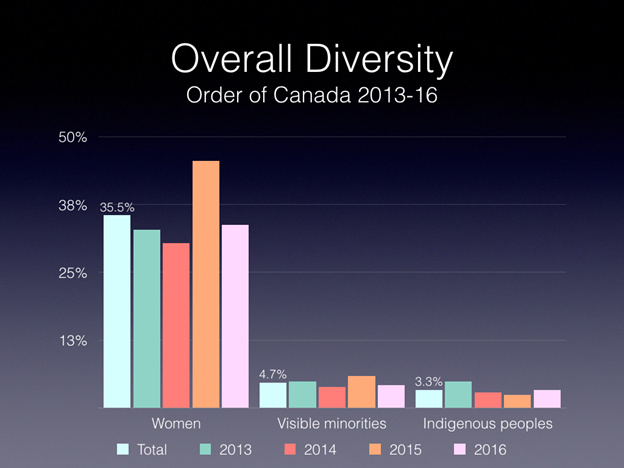 While Rideau Hall has not analyzed appointment diversity with respect to visible minorities and Indigenous peoples, it has provided historic data from 2000-14. Chart 6 presents this along with 2015-16 data. The overall trend, apart from the anomaly of 2015, has been a slow but measured increased in the percentage of women recipients. Rideau Hall data shows that about three-quarters of nominations are men compared to the two-thirds of male recipients, suggesting there may be a conscious effort to ensure more women recipients. 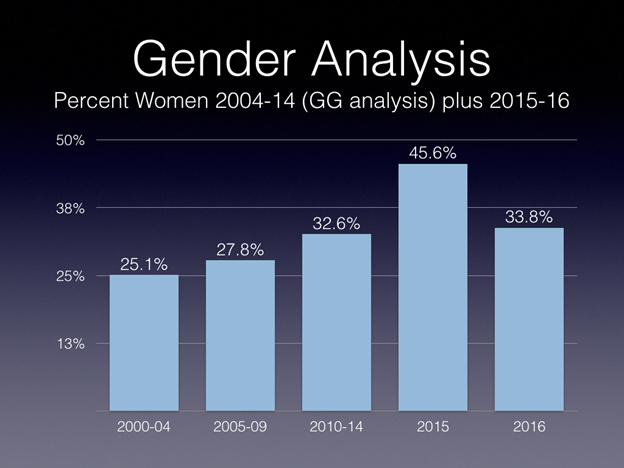 In traditional employment analysis, one looks at levels (or rank in Order of Canada terms) and representation, expecting to see greater representation of under-represented groups at more junior levels than the senior ones. Given the nature of the Order of Canada, this general trend does not appear among the companions, the highest Order of Canada, likely again reflecting a conscious effort to ensure all groups are represented at that level. Women form 44.4 of Companions, visible minorities form 11.1 percent. There were no Indigenous Companion appointments during this period.

The general trend of greater representation at junior levels does appear with respect to women who form 23.6 percent of officers compared to 39.1 percent of members, as shown in Chart 7. 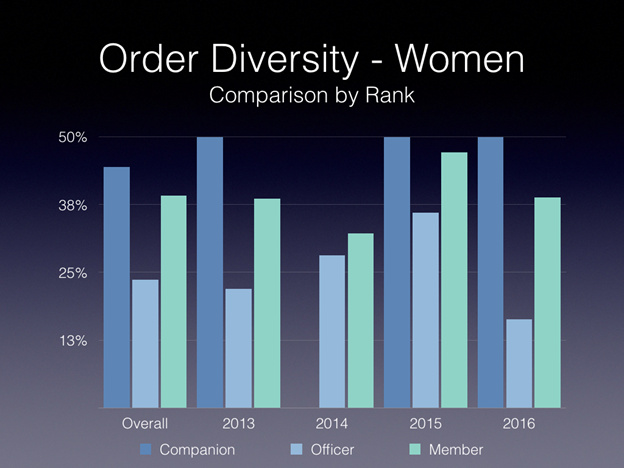 For visible minorities on the other hand, officers are over-represented compared to members as shown in Chart 8, where one also sees evidence of a conscious effort at the companion level.

The same pattern of relative over-representation of officers compared to members is seen with respect to Indigenous recipients as shown in Chart 9, with an exception in 2014. 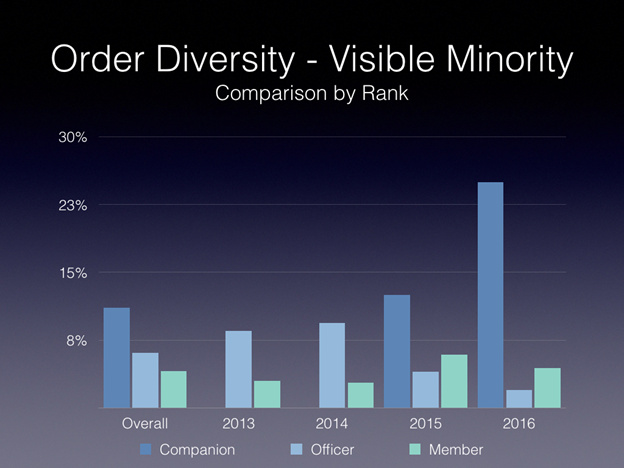 As noted in the introduction, the objective of the Budget 2015 measure was to increase the representation from under-represented sectors. Given the timelines involved in the Order of Canada nomination and appointment process (about a year and half), it is not surprising that there is little change in the overall pattern of appointments that can be attributed to this decision and related funding. Appointments in 2017 are more likely to reflect this objective.

This is particularly true with respect to regional representation which has remained largely the same with year-to-year fluctuations, with the exception of a small but steady decline in Quebec recipients. The West, particularly the Prairies, remain under-represented in relation to their population, as is Quebec, with Ontario over-represented in relation to its share of the population. This overand under-representation may reflect, at least in part, the relative economic, institutional and cultural strengths of each region and province (e.g., the dominance of Ontario).

There does appear to have been a small but significant shift over the past four years from the arts to business sectors, one of the likely goals of the additional funding but a shift that was already occurring before the additional funding. There has also been overall growth in the relative share of recipients with a health care and public service background, with other areas remaining largely flat or slightly declining.

In terms of employment equity groups — women, visible minorities, and Indigenous people — under-representation likely reflects the overall pattern of society as a whole, where relatively fewer persons from these groups have prominent or senior positions. There may also be a certain bias among those submitting nominations, as seen in more men being nominated than being awarded.

However, it does appear that the Advisory Council for the Order of Canada is making a conscious effort to compensate somewhat for this tendency, particularly notable with respect to companion appointments.

The Advisory Council and its supporting secretariat should consider broadening their current internal tracking of gender and regional representation to include the other employment equity groups: visible minorities, Indigenous peoples and persons with disabilities. In doing so, it may assist Rideau Hall in its efforts to increase diversity.

This analysis is based upon the Governor General June and December Order of Canada appointment lists. Gender information is taken directly from the names and citations, visible minority and Indigenous peoples information is taken from a combination of names, citations and web searches. Rideau Hall provided the historical data 2000-14 and was helpful in responding to questions.

Provincial data is from the appointment lists. Where more than one province is listed (rarely), the smaller province is used.

The following table has the definitions I used for the background of recipients. As with any categorization, especially for a group as accomplished as Order of Canada recipients, judgement calls were made with respect to which category was most appropriate, as noted in the definitions. 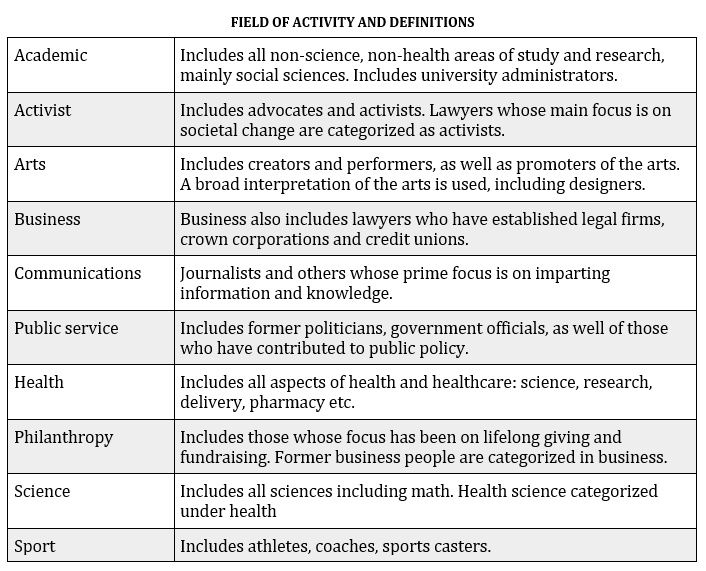