The Government of Canada’s Main Estimates 2017-18 were released February 23, 2017 and contain mixed news for the Department of National Defence (DND); some good news, some bad, and some ugly.

The one piece of good news is that the Trudeau government has adhered to their campaign pledge to maintain DND’s existing spending plans. DND has an annual, built-in budget increase known as the ‘escalator.’ Beginning in 2008, the escalation was increased to 2 percent a year, and the 2015 Budget promised that the escalator wold rise to 3 percent for ten years, starting in the 2017/2018 fiscal year.

In their campaign platform, the Liberals committed to “maintain current National Defence spending levels, including current planned increases.”[1] The Minister of National Defence’s mandate letter provided him that same direction, verbatim. The 2017/2018 Estimates provide DND with “an increase in the annual escalator on defence spending as announced in Budget 2015 to provide long-term and predictable funding.”[2] While the escalator’s value is not identified specifically, it provides DND with an additional $550 million in funding for 2017/2018. If the Liberals keep the escalator at 3 percent, it will provide a highly beneficial, long term increase, as this funding increase compounds over time. To date, these additional funds have been applied to DND’s Vote 1 operating accounting, giving it increased funding for Operations and Maintenance.

The bad news, however, is that even with the increase in Vote 1 funding, in nominal dollars DND’s funding is essentially unchanged since last year, increasing by only 0.1 percent to $18.666 billion. More troubling, is that over the last several years, adjusted for inflation, defence spending is down, considerably. The allocated spending for DND in 2017/2018 is roughly three quarters of the amount provided in the Main Estimates from 2010/2011 (see Figure 1). In historical context, these Main Estimates are on par with those from 2007, or 1994. Stated otherwise, the purchasing power of projected defence spending is effectively back to where it was just before the combined Martin and Harper government spending increases took effect (in 2007) and roughly equivalent to where it was mid-way through the ‘decade of darkness’ after the Cold War (in 1994). 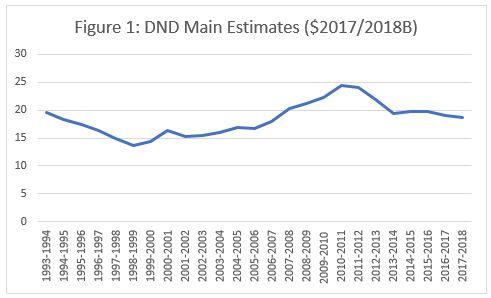 The ugly news relates to Capital funding. For 2017/2018 just $3.1 billion is being allocated to buy new equipment and build infrastructure, down from $3.5 billion the year before. In historical perspective, even in nominal dollars, this is the least amount of money allocated for DND Capital spending in a decade (see Figure 2). Adjusted for inflation, DND has just over half as much money to buy new equipment and build infrastructure as it did in 2010/2011 (see Figure 3). 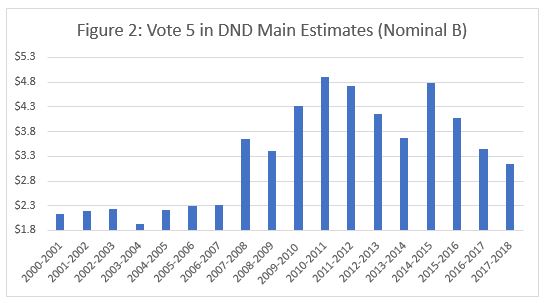 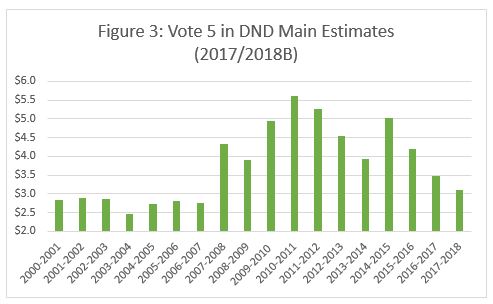 As we wait to see what Budget 2017 and the Defence Policy Review does for the Department of National Defence, the Main Estimates are a pessimistic indicator of the Canadian military’s fate. In the context of active discussion of defence burden sharing and defence spending, Canada plans to spend less this year on defence, after inflation, than it did the year before.

David Perry is a Senior Analyst with the Canadian Global Affairs Institute.