Rio de Janeiro: A War By Any Other Name

The police officers shot the two men as they lay bleeding. The summary execution of injured and unarmed men by the police was caught on film last month, this time in Rio de Janeiro. They were not the first to be summarily executed and will not be the last. Such killings are routine in the marvelous city. Extrajudicial killings rose at least 70% in the first months of 2017 when compared to the previous year. Virtually all forms of violence are skyrocketing, especially in the poorest parts of the metropolitan area.

There is a sinking feeling that Rio de Janeiro is tipping into war. Some of the city’s politicians, police officers and prosecutors are saying so publicly. They use the term metaphorically – drawing attention to the relentless bloodshed across the city. The expression is also invoked politically – to urge a militarized response and protect security forces from jail-time should they use excessive force. Although the intensity and organization of violence has certainly increased, the expression – war - has dangerous implications that many people may not fully grasp.

There is no doubt that Rio de Janeiro periodically experiences conditions bordering on armed conflict. At least 6,248 people were assassinated in 2016, a rate of 37 homicides per 100,000 residents (Figure 1). The military police were involved in killing 920 residents, and dozens of officers lost their lives in the line of duty (Figure 2). At least 52 police officers have already been assassinated in 2017. A military police spokesperson described the casualty rate among Rio´s security forces as being significantly higher than those experienced by combatants during the Second World War, the Vietnam War, and even wars in Iraq and Afghanistan. 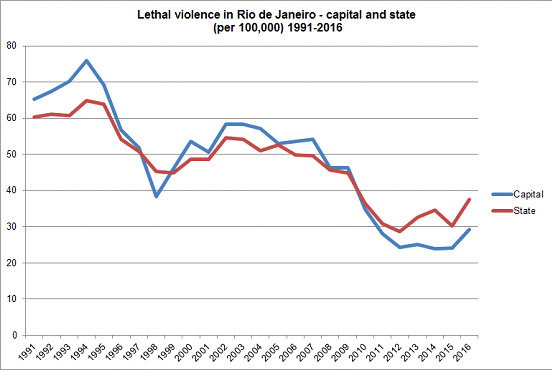 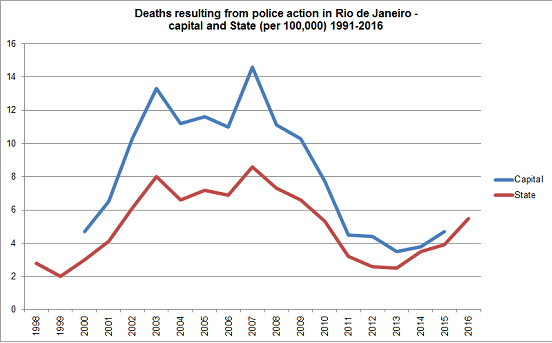 The fighting is being waged by an array of well organized armed groups. Rio de Janeiro’s military and civil police are on the front-line, moving into communities in armored vehicles and brandishing assault rifles. The state’s principle gangs - the Comando Vermelho, Amigos dos Amigos, and Terceiro Comando Puro - are similarly well equipped. There have been sightings of heavy machine guns and rocket-propelled grenades in the arsenals of various drug trafficking groups. The militia, made-up of former policemen and firefighters who originally formed to defend neighborhoods but are now involved in all manner of extortion, are also bristling with high caliber firearms.

The humanitarian consequences of these clashes are severe. Daily gunfights inevitably result in unintentional killing and injury of civilians. Stray bullets travel up to a mile or more in densely populated areas, including through the walls of hospitals and primary school. Children regularly fall victims to "balas perdidas", or lost bullets as they’re known in Brazil. Local activists have even designed digital apps to track gunfire, film rights violations, and predict crime trends in a bid to keep locals safe. City residents are physically and psychologically traumatized. Educational and health facilities are routinely shut-down, denying life-saving assistance.

While tempting to use the terms "war" and "armed conflict" to describe Rio de Janeiro, there are legal consequences once they are invoked. The law of armed conflict - also known as international humanitarian law - set out the rules for what is, and what is not, acceptable behavior in situations of international and civil armed conflict. Its principles were designed over the past century to prevent unnecessary suffering while not impeding the waging of war. They were intended to regulate "conventional" armed conflicts between states rather than situations such as Rio de Janeiro that fall below the threshold set by international criminal tribunals.

There are unintended outcomes associated with applying international humanitarian law to these "other situations of violence" such as Rio de Janeiro. This is because the application of such rules can influence how governments decide to "combat" armed factions. It may precipitate militarized responses, including the deployment of the armed forces. It could lead the introduction of emergencies and the suspension of civil liberties. The invocation of humanitarian law in unconventional armed conflicts such as Rio de Janeiro could also be severely challenged by governments who feel it undermines their sovereignty.

According to some experts, the customary principles of international humanitarian law – and in particular Common Article 3 of the 1949 Geneva Conventions - apply in situations like Rio de Janeiro. John Sullivan believes that “when combatants – in this case gangsters or criminal insurgents – control sufficient state territory to conduct sustained military operations the obligations articulated in Article II of the 1977 Protocol come into force”. Sullivan notes how states are reluctant to admit that domestic criminal justice laws are ineffective and that insecurity and impunity are reaching levels of a non-international armed conflict. “Gangs with distinct uniforms and insignia are an indicator that a threshold has been crossed as is the control of territory and the provision of local security, informal justice, social goods and the levying of taxes.”

Notwithstanding these conceptual and legal concerns, international humanitarian law offers practical ideas for how to minimize the human costs of Rio de Janeiro's chronic violence. For example, international humanitarian law demands that the population - whether wounded, surrounded or detained "shall in all circumstances be treated humanely, without any adverse distinction founded on race, color, religion or faith, sex, birth or wealth, or any other similar criteria". This norm has less to do with condoning international intervention or legitimizing gangs, than with civilizing the most uncivil of human endeavors - armed violence.

When considering the situation in Rio de Janeiro or any other armed conflict, all parties involved in perpetrating violence have an obligation to protect the civilian population. This is an old norm – going back to ancient treaties that gave rise to the laws of armed conflict as well as the 1948 Universal Declaration of Human Rights. According to international humanitarian law, the protection of civilians applies in all circumstances and even to situations where war has not been formally declared. Violence to life and person, including murder and summary executions, is prohibited. The law also forbids torture, humiliating and degrading treatment.

What is more, international humanitarian law stresses that all public health and educational facilities are strictly off-limits. The Universal Declaration of Human Rights also firmly underlines the requirement of governments to protect health and education services and ensure their access at all times. International law stresses how armed violence must avoid affecting schools and hospitals and respect their proper functioning. This is non-negotiable and a fundamental guarantee for children in all circumstances. Yet it is flagrantly disregarded in Rio de Janeiro. Not surprisingly, there are military lawyers in Brazil carefully monitoring the situation on the ground.

Both international humanitarian and human rights law will not prevent armed conflict or other situations of violence - they were never supposed to. They are fundamentally about preventing unnecessary suffering of the population, the wounded and sick, the surrounded, the detainees, and guaranteeing their fundamental rights. This is why these international norms are still widely considered legitimate and applied in wars and armed conflicts around the world. They can protect innocent women and children, reduce the deaths of military and police officers, and strengthen opportunities for lasting peace – including ceasefires and truces.

There are far-reaching legal ramifications that arise from violating international humanitarian law. Today, measures that include the willful killing of innocents, torture and inhuman treatment including unlawful confinement, and extensive destruction and unjustified appropriation of property can be considered crimes against humanity or war crimes. In extreme cases, these actions may result in referrals to the International Criminal Court. At the very least, they will require domestic legal sanctions.

It is hard to determine if Rio de Janeiro fits the description of an armed conflict or not. The situation is symptomatic of many other urban settings affected by chronic violence, including San Salvador, Caracas, and even Cape Town. These cities are experiencing rates of violence exceeding some of the world’s most violent wars, but they are not classified as “at war”. Surely international humanitarian and human rights law offer some guidance to ensure that the population is not forced to suffer even more than it already has.

Robert Muggah oversees research at the Igarapé Institute, a think and do tank working at the interface of security and development. He is also research director of the SecDev Foundation, a cyber-analytics group. He is a a fellow at the Graduate Institute in Geneva, the University of Oxford and the University of San Diego. Before that he directed research at the Small Arms Survey (2000-2011). Robert works with the UN and World Bank, among others, in over 30 countries. He was recently named one of the top 100 most influential people in violence reduction and between 2014-2016 he delivered talks at TED Global, the Web Summit and the World Economic Forum in Davos, Abu Dhabi, Medellin and Geneva. He is the founder and executive editor of Stability Journal, and serves on the editorial board of several academic journals. Robert is also affiliated with the World Economic Forum Global Agenda Council on Fragility, the Global Initiative Against Transnational Organized Crime, the Know Violence in Childhood Initiative, and other international networks. He earned his PhD from the University of Oxford. He can be contacted at  [email protected].