Is the Ground Shifting in Asia?

Is the Ground Shifting in Asia?

Did the world’s balance of great power tilt a bit last month? Can meetings between national leaders be signs of inexorable and dramatic change in global and regional politics? The leaders of Asia’s Big Three – China, India and Japan – held two separate summit meetings in the latter half of October. Each of these gatherings, in Beijing and Tokyo, made meaningful strides in reshaping respective bilateral relations.

They also sent signals of the shape of things to come in what used to be called the Far East. Indeed, at this moment, policies and initiatives among the Big Three are primarily economic in nature. But they also have security dimensions. The key questions for the futurists are whether and when big power policies assume destabilizing defence and security challenges. They also point directly to questions about what role the United States will continue to play.

Prime Minister Shinzo Abe visited Beijing in mid-October, breaking a seven-year dry spell of official visits to China – although President Xi Jinping and Abe have met, uncomfortably it appears, at multilateral summits. As leaders of the world’s second- and third-largest economies, Xi and Abe had a lot of economic issues to discuss and decisions to announce. These included a new framework to address technological co-operation and intellectual property protection; removal of a ban on food imports from Japanese prefectures affected by the Fukushima nuclear disaster; an enlarged currency swap agreement and a renewed push for joint development of the gas fields in the East China Sea – so far, easier to announce than to implement.

Of greater geographic and political significance, China and Japan agreed to collaborate on a large number of infrastructure projects – 52 have been targeted – under China’s Belt and Road Initiative, with Japan contributing its own financing to some of them. Some of the terms and conditions of China’s aggressive development assistance policies across Asia, stretching all the way to Europe, have been criticized as modern forms of colonial control, such as saddling recipient countries with more debt than they can manage, with some countries cancelling signed projects outright. Japan has made the strategic decision to collaborate with China, contributing experience, legitimacy and perhaps reassurance to countries needing roads, ports and airports, but fearful of over-dependence on China.

Off-and-on tensions arising over the Japanese-controlled Senkaku Islands – which China claims and calls Diaoyutai – are not likely to abate. However, China and Japan are inching towards co-operation on practical issues of search and rescue, fleet visits, a military hotline for when tensions at sea escalate and senior military visits at joint staff levels.

Abe’s summit with Prime Minister Narendra Modi engaged in somewhat more rhetoric: “No two nations have as much potential together as Japan and India,” intoned Abe, only to be trumped, so to speak, by Modi: “Without India-Japan co-operation, there will be no development in Asia into the next century.” We’ll see about that. In the interim, building greater economic interdependence remains a challenging objective for both countries. Bilateral trade numbers are relatively minuscule, at less than US$14 billion a year, and Japanese investment of US$25 billion over the last two decades is small. (Japanese direct investment in China is over US$80 billion, with an estimated 34,000 companies on the ground). Abe promised Modi US$2.7 billion in infrastructure financing, and as with China, joint infrastructure projects with India in South Asia. 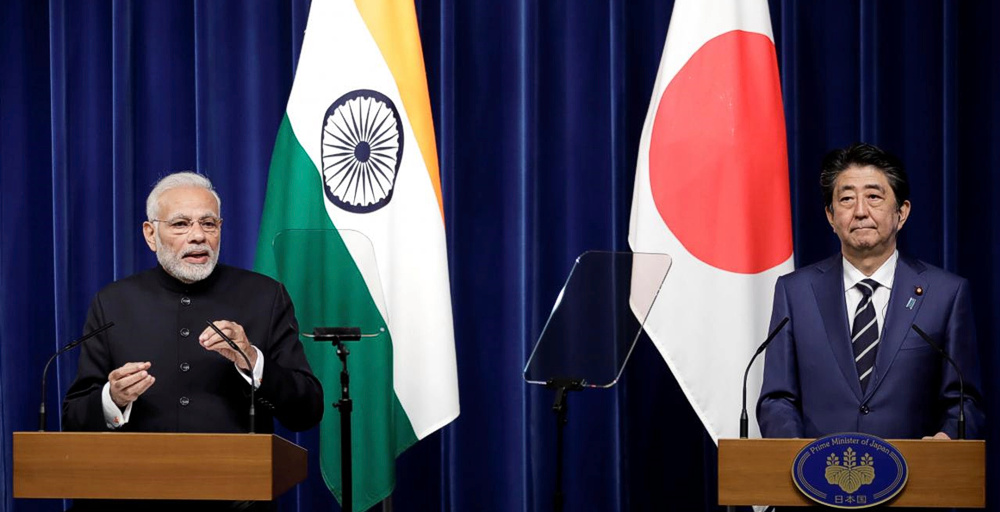 Abe’s more significant objective is to engage India in an evolving strategy to ensure Indo-Pacific maritime security through defence as well as economic co-operation. In addition to enhanced security ties with Australia, New Zealand, the Philippines and other Asia Pacific nations, Abe has been promoting a more substantive quadrilateral co-operation mechanism, joining Japan and the U.S. with Australia and India. To the extent that this is presented as a “China containment” strategy, India has indicated that it wants no part of it. Indeed, it is developing its own military-to-military channels with China. Nevertheless, Abe and Modi flagged the importance of established joint if modest exercises between their ground, sea and air forces and an effort at establishing a military acquisition and cross-servicing agreement, which facilitates the sharing of supplies and limited access to military bases. Canada has one of those as well with Japan.

According to news reports, despite these bilaterally focused meetings, President Donald Trump’s shadow loomed over Beijing and Tokyo. Trump’s address to the UN and Vice-President Mike Pence’s subsequent speech on China-U.S. relations described the administration’s broad-based assessment of Chinese economic, social and security policies as direct challenges to the United States. What America will do about it, other than raising tariffs against more Chinese goods and restricting investments, is anybody’s guess. And while targeting China, the implications of U.S. bilateralism concern all of Asia. They contribute to economic uncertainty and inadvertently push China, Japan, India and other Asian nations closer together in support of the post-war liberal trading systems. The U.S.’s abandonment of the Comprehensive and Progressive Agreement for Trans-Pacific Partnership (CPTPP) has led to hints that China may be interested in joining. A less ambitious but Asia-based Regional Comprehensive Economic Partnership including China, India and Japan among 10 countries is propelled, in part, by similar forces. U.S. economic policy uncertainties and Trump’s attacks on established allies on the security and economic fronts are also energizing regionalisms that inevitably will have security consequences.

That said, other significant realities will shape these trends. China’s economic, political and military capabilities are irreversible, even in the face of possible domestic challenges to its governance. India’s multi-directional foreign policies are part of its national identity – Russia, for example, remains its principal weapons provider. And the Japanese security treaty with the United States, for the foreseeable future, is an equally fundamental reality. All are part of the mix that will define the future. There are not straight lines in politics, domestic or international.

For Canada, the Far East has, in recent decades, not been far at all. Transpacific trade surpasses transatlantic exchanges by almost 20 per cent. The CPTPP will potentially increase this significantly with, hopefully, the Comprehensive Economic and Trade Agreement (CETA) giving it a run for its money. Immigration flows are predominantly from Asia. Our national security and political ties to Asia would be severely tested in the case of conflict in the region, even absent NATO types of treaty commitments. News from China and India is widely available in traditional and digital media and Canadian public opinion on Asia’s giants influences our foreign policy, as the Asia Pacific Foundation of Canada’s surveys make clear. Bilateral and multilateral deals that contribute to growth in Asia provide trade and investment opportunities for Canadians.

Big picture geopolitical developments, the kind that focus the attention of politicians, diplomats and the commentariat, are on a continuum from dramatic – think the foundation of the UN or NATO – to subtle and difficult to discern. These Xi-Abe and Modi-Abe meetings and attendant commitments are at the modest end of the scale. But they call no less for attention by Canadians and our government to ensure that we benefit from whatever emerges.

Joseph Caron is an honorary professor at the University of British Columbia’s Institute of Asian Research and Canada’s former ambassador to China, Japan and India. He is also a Distinguished Fellow with the Asia Pacific Foundation of Canada.