Canada’s Capacity to Engage: Tough Questions to Ask and Hard Answers to Address

Whatever path Ottawa chooses to secure Canada’s global interests as a middle power, changing geopolitical realities underline our lack of resources in military, diplomatic, national security or soft-power capacity to advance our interests beyond our own borders. The challenge facing Canada in responding with other middle powers to new Chinese assertiveness and Russian unilateral military initiatives is clear.

Our options in terms of shaping a meaningful deployment, as a middle power and consistent NATO partner, are limited by the too modest size of our armed forces.  We simply lack the army, navy, air force and special forces’ size, depth and capacity to contribute meaningfully in multi-power deterrent, combat, containment or show-the-flag engagements. This is not about the competence, training or individual abilities of our women and men in uniform who are among the very best in the world. It is not their fault that the force in which they ably serve is too small.

Canadians may remember how, under prime minister Louis St. Laurent, then-Foreign minister Lester Pearson helped set up the United Nations Emergency Force, one of the world’s first high-octane peacekeeping initiatives to sort out the Suez Canal crisis in the mid-1950s. Pearson won the Nobel Peace Prize for his and Canada’s leadership on the peacekeeping file. Canada then had the capacity and logistics to move 5,000 soldiers to the Sinai for that UN peacekeeping operation on our own Royal Canadian Navy (RCN) ships. Our depleted complement and materiel numbers would make that kind of deployment a difficult stretch today.

A simple review of our armed forces’ per capita numbers for our population shows how far down the list we are compared to other NATO allies and other middle-power non-NATO friendly countries. Canada possesses fewer soldiers per capita than the vast majority of its NATO allies, as well as other developed friendly nations such as Australia and Sweden. In terms of weighted fire power, an index maintained by Global Fire Power Inc. ranks Canada 23rd after middle powers like Spain, Brazil, South Korea, Australia, Japan and Italy.

These ratios say to our NATO partners that we are very much in the “big hat, no cattle” category of countries that offer “all aid short of help.” This perception does not create foreign or security policy leverage for Canada.

To the prime minister’s credit, the newly appointed ministers of Foreign Affairs and Defence reflect a constructive renewal of cabinet capacities. The mandate letter to the minister of National Defence stresses keeping the forces strong in meeting existing domestic and external requirements. But there is no direction for the minister to facilitate a broad increase in the complement and capacity needed to face a changing global mix of powers and threats – including combat readiness and peacekeeping deployments. Nor is there any mention of doing a frank analysis of present capabilities, shaped six years ago versus what is required now and in the near future for the new era of Russian military adventurism, Chinese global assertiveness and the potential decline of the U.S.’s global will to intervene.

Having a regular force of 68,000 for a country with 38 million inhabitants and one of the world’s largest geographic territories with three seacoasts to patrol and defend is not enough. The outstanding, well-trained and courageous women and men in the Canadian Forces may well be able to use their skills to increase the impact of a tiny armed force. But at some point, that leverage-skill-matrix shuffle will not be enough. The recent commitment of an additional RCN frigate, surveillance aircraft and more artillery gunners to augment our standing Operation Reassurance commitment seems desperately underwhelming to the scope and range of the Russian invasion of Ukraine. As President Vladimir Putin seeks to intimidate NATO into changing the balance of power in Europe in a way that would put democracies like Estonia, Latvia and Lithuania at risk, and profoundly reshape the transatlantic security framework, what do our highly limited deployment options say about our vaunted commitment to democracy, national sovereignty and a rules-based international order?  The capacity to deploy is a critical element of any government’s foreign policy reach and influence.

If the prime minister and his government are serious about Canada’s role in the world, about a new Indo-Pacific strategy or standing with our European partners and allies, and also having the capacity to execute stabilization and peace-creating deployments abroad, we need a full-time regular force of at least 100,000 men and women and a reserve force of at least 60,000 with the platforms and systems to support it. This would make Canada’s armed forces per capita more comparable to the other middle-power allies in NATO and others such as Australia and Sweden.

At our present strength, the army has roughly 22,000 soldiers in nine infantry battalions, with each having around 700 members. Some of those are light battalions with less complement. Our deployment to NATO’s Afghanistan campaign peaked at about 2,500 military, or about three and a half battalions. Twenty-five per cent of our forces in the Afghan theatre included reservists from all three services. A portion of every deployment involves logistics, support services and administration and special forces. Actual combat-ready forces in any deployment are significantly less than the deployment’s total size.

Increasing the armed forces’ strength to 100,000 members, and allowing for proportionate allocations to the navy, air force, army and special forces, could produce between eight and 10 more battalions. In the context of necessary deployments to Eastern Europe, this would radically increase any Canadian government’s flexibility in terms of collaborating with our allies to deter Russian aggression. A solid deterrent prevents threatened aggression. Extra battalions made available by more rational funding would also allow training for varied aid to the civil power roles, in urban and rural Canada, under the provisions of the National Defence Act. Partnership with NATO was reflected by a robust multi-year deployment to Afghanistan under NATO’s Article Five, to one of the most difficult areas of the country. Could our Canadian Forces now manage a similar effort?

We have recently heard high-ranking Canadian military leadership lament a 10,000-person drop in existing capacity (68,000), which in the navy’s case threatens necessary complement levels for our soon-to-be augmented fleets on both the Atlantic and Pacific coasts. 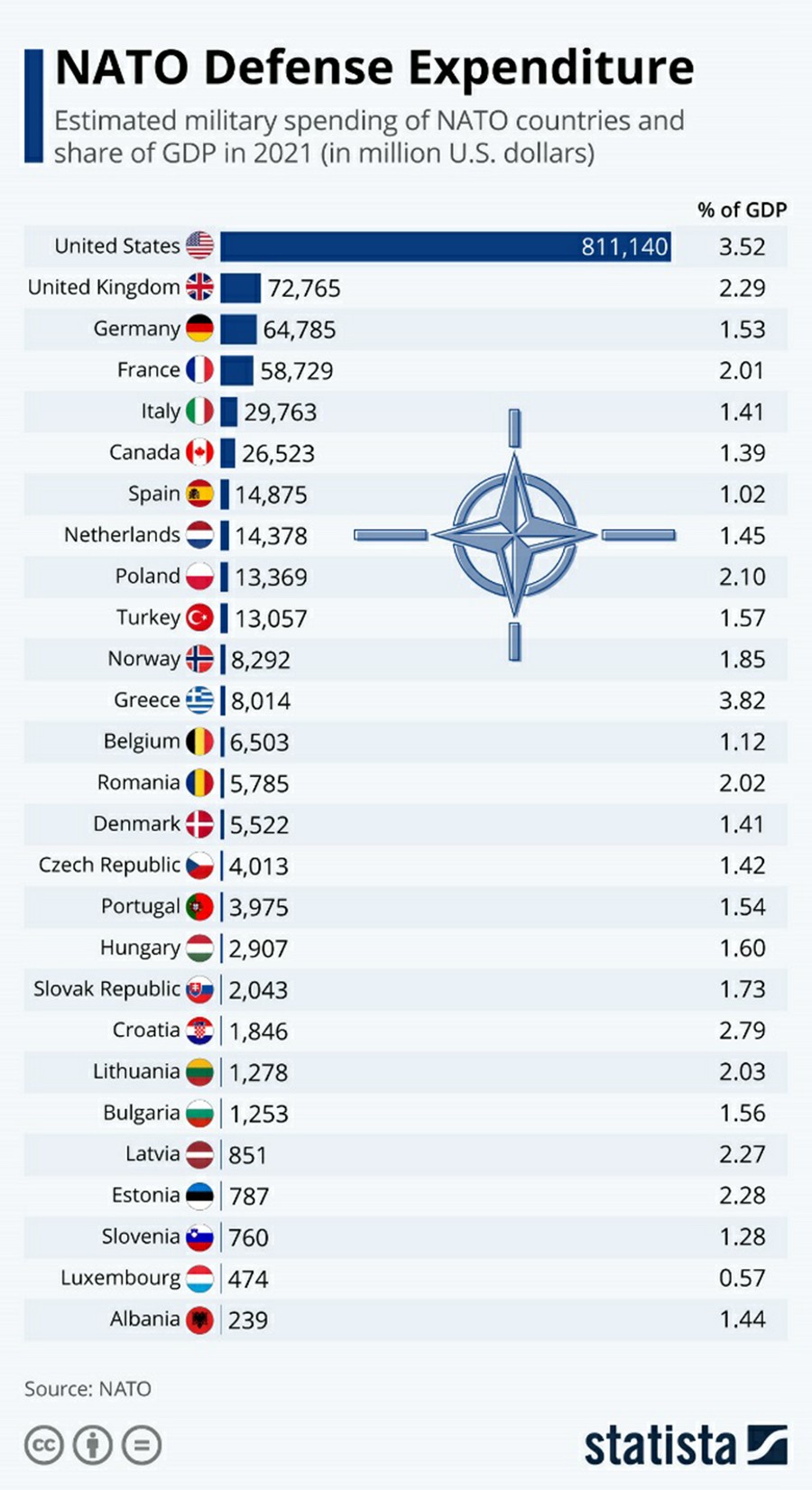 The two-per-cent-of-GDP target for collective defence spending established at the Wales NATO Heads of Government meeting that preceded Prime Minister Justin Trudeau’s election in 2015 is often cited as a critical national defence spending goal, which Canada is pursuing very slowly.  But that metric does not accommodate the capacity and capability goals a country like Canada must address. Ukraine’s requests for defensive support in its confrontation with Russian invaders have mostly been met with non-lethal donations from Canada. Canada does not have any meaningful anti-aircraft or mobile ordnance to share, though it has contributed anti-tank weapons. To be capable enough to do our share in continental defence and aid the civil power, alliance and UN responsibilities, exceeding the two per cent of GDP annual expenditure is probably required.

Reductions in foreign development aid and military capacity are by no means the fault of only the present government.

Since the Second World War and the establishment of NATO, only two prime ministers – St. Laurent, a Liberal, and Brian Mulroney, a Progressive Conservative – have invested the two per cent or more of GDP called for at the NATO summit in Wales in 2014. Other prime ministers have either held the line, or slashed defence spending. On a real-dollar basis, taking inflation into consideration, the $23 billion committed to present-year spending buys far less than it might have some years ago. That spending level, as a percentage of GDP, takes us down to the 24th rank in the NATO alliance.

When the leaders of a military alliance set a specific time-limited investment goal, as happened at the NATO meeting in Wales, and Canada adds in non-military spending to puff up our actual military spending, our allies and potential enemies take note, if only sufficiently to set us aside as serious partners or tactically relevant participants.

Having a navy with about 12 deployable ships on each coast, (if one counts those in refit), no effective submarine force and ancient Aurora anti-submarine patrol planes pretty well at the stage of metal fatigue, raises serious doubts about our ability to patrol our own coasts. Having failed so far to seriously ramp up our share of the NORAD Early Warning System modernization in our own Arctic region, an investment essential to North American defence, tells the Americans that we are not even serious about continental defence.

Still unable after many years to choose the next fighter replacement for our aging, if venerable CF18s, and toying with a candidate Swedish aircraft whose selection would remove us from any interoperable engagement alongside air defence  allies like the U.S, Australia, the U.K. and others, sends a message about our uncertainty as a NATO air defence ally in North America or Europe.

It is as if Ottawa has decided to fall into a disconnected defence policy rut simply through not keeping our eyes on the actual road ahead. The Strong, Secure and Engaged defence policy statement of 2017 has been overtaken by global great-power change, and our own government’s purposeful or distracted disengagement from defence and foreign policy exigencies.

Beyond the successful negotiation of an updated U.S.-Mexico-Canada Free trade renewal, despite the protectionist nationalism of former president Donald Trump, which was no small feat, Canada’s impact beyond our own shores has been inexcusably minimal.

The opportunity here for Ottawa is compelling. An integrated foreign policy and defence review, launched in the coming spring budget and reporting to Parliament by the end of 2023, would be of immense value and bring great credit to the government.

There are critical questions that would be of tremendous value. These include:

That kind of inquiry could produce key results before the next election, allowing our political parties, media, community, nonprofit, labour and business groups to express their support or opposition at the polls, in a way that would actually reflect how democracies are supposed to make important decisions.

Hugh Segal, a CGAI fellow and former chair of the Senate Foreign Relations Committee, and   the NATO Association of Canada, is Mathews Fellow in Global Public Policy at Queen’s School of Policy Studies.