The Trudeau family’s ill-starred holiday in India has triggered scorn and opprobrium in Delhi and derision from thoughtful international opinion leaders such as the Carnegie Institute, the Washington Post and the BBC.

Canadians seduced by the feel-good publicity created during Prime Minister Justin Trudeau’s previous trips abroad – where his strong jaw, easy charm and goofy socks made him the unTrump – must be confused by how those old tricks utterly failed him in India. They may wonder whether the sartorial excesses and political blunders committed in India and the tsunami of negative publicity that they have generated are an indication that the remarkable global honeymoon the prime minister has enjoyed for more than two years may have suddenly come to a crashing end.

After the Indian debacle and gaffe-prone trips late last year to China and Vietnam, where Trudeau managed to offend Beijing, Tokyo and Canberra, his halo-like glow may be diminished at the G7 where he has promised to push a highly ambitious personal agenda. He wants other members of the G7 to embrace his government’s overarching priorities, which include confronting gender inequality, correcting the wrongs committed against Indigenous peoples and the LGBT communities, and doing something about climate change.

As noble as such ideas may be, there is little evidence that Trudeau’s enthusiasms are considered priorities by any other G7 states – with the exception of confronting environmental issues. Moreover, on climate change Canada is not in a strong position, since until now Trudeau’s record on tackling climate change is remarkably similar to that of his predecessor, Stephen Harper.

Summit meetings are ponderous, tightly scripted affairs where there is usually little time to deliberate about what most countries would consider peripheral matters. Subjects that the other G7 leaders consider to be of much greater consequence include Brexit, shaky stock markets, and North Korea and Iran and their nuclear capabilities. There is also deep concern among Canada’s closest allies about terrorism and how or whether to counter Russia’s actions in Eastern Europe and the Middle East while keeping a nervous eye on what China is up to, especially in the South China Sea and East China Sea.

It is highly unlikely that the social issues that animate the Canadian leader go over well with Donald Trump, either, and Trump’s co-operation will be required if NAFTA is to have any future.

In the same way, the prime minister’s lofty notions about social engineering and subjects such as the treatment of minorities are non-starters with China and India. There is no chance that Xi Jinping or Narendra Modi will permit Trudeau to preach to them about any of this, let alone allow such ideas to be enshrined in trade agreements.

The wonder is that Trudeau is only now becoming regarded as an international lightweight after a long blaze of positive coverage from Western liberals who, with Trump in the White House, regarded the Canadian as their last, best hope. It is just as easy to compose a far less flattering competing narrative for Trudeau. Despite his jet-set upbringing and his familiarity with world-class hotels and restaurants, Trudeau has long been out of his depth on subjects other than what Le Monde derisively referred to as “fashion diplomacy.” This was obvious before he got elected 30 months ago on a wafer-thin résumé, a well-known family name and voter hostility to Harper. 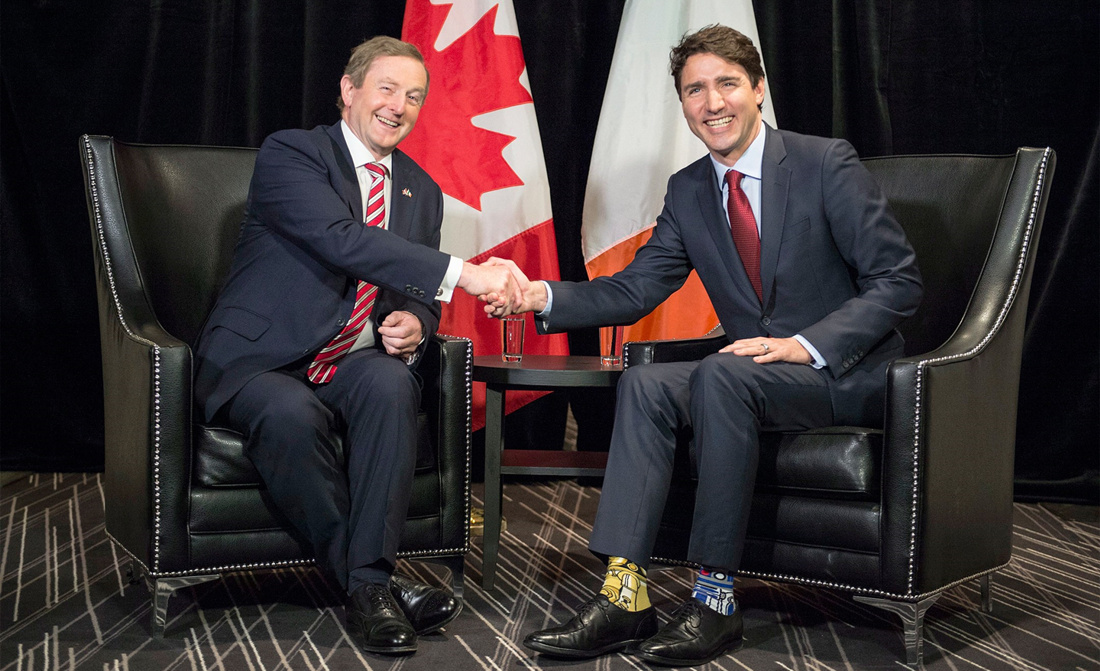 Figure 1: Prime Minister Justin Trudeau wearing R2D2 and C3PO styled socks while meeting with the Prime Minister of Ireland, Enda Kenny, in Montreal. As the author notes, Trudeau’s choice in socks have become a large part of his “fashion diplomacy.” (GQ)

An early hint that Trudeau was naive about foreign affairs came when he declared during the 2013 Liberal leadership campaign that he admired China’s “basic dictatorship”, because it made it easier for government to impose its views on the economy and environment.

Trudeau also did not endear himself to Paris on his first foreign trip shortly after being elected prime minister. Arriving in Turkey after France suffered a terrible terrorist attack by men with Middle Eastern connections, Trudeau immediately declared that Canada would continue to welcome refugees and would withdraw its fighter jets from the western coalition striking the Islamic State in Iraq.

Another folly that raised many eyebrows was when Trudeau praised Fidel Castro as a “remarkable leader” after the Cuban dictator died. Somehow left unsaid was that Castro was a despot with an appalling human rights record.

Apologies followed after each of these unforced errors. More mea culpas may soon be going out to the United Nations. The prime minister’s naked desire for a seat on the UN Security Council is in serious peril today because of dithering over a noisy promise he made and has repeated many times since winning the election – to send a force of blue helmets to Africa. Nearly three years after first stating that Canada would be a leader in UN peacekeeping, he has only made a vague commitment to provide a single transport aircraft and small number of aircrew and maintainers to assist UN peacekeepers with logistics in Africa. A decision on a couple hundred other troops for Africa may still be several years away.

Trudeau’s personal priorities were already obvious when he travelled to Eastern Europe in 2016. On that foray, Trudeau committed Canadian troops to act as a tripwire to deter Russian aggression against the Baltic states, paid his respects at Auschwitz where he met with Holocaust survivors and signed a trade deal in Kyiv that the Harper government had negotiated. He also witnessed Canadian military trainers assisting Ukrainian combat troops in a live-fire exercise just before those troops deployed to Eastern Ukraine to fight Russia and its proxies.

But none of these weighty events seemed to count for much with the prime minister. During a chat with reporters at the back of the Airbus on the return flight to Canada, a television journalist asked Trudeau what had been the personal highlight of his trip. After a long pause to consider his answer, Trudeau said that his meeting with LGBT activists in Kyiv had been the most memorable. They were remarkably brave, he said of the activists, adding that he must remember to do similar outreach during all his foreign trips.

In something of the same spirit of social engineering, the Canadian Armed Forces announced last week that it was sending a full-time gender adviser to oversee the working environment of the 450 soldiers now in Latvia. That such issues are of paramount importance to the Trudeau government can be seen in the fact that every federal ministry must provide a gender-based analysis, consider gender equality, and document what it intends to do about it when it presents material to the government. Case in point, the federal budget delivered this past week used the word “women” more than 600 times.

As the world apparently tires of Trudeau’s self-absorption and his costume dramas, it is difficult to see how he will have the intellectual heft and gravitas required to convince Vladimir Putin’s faltering Russia, the G7, and especially the U.S. and the emerging superpowers, China and India, that his views on gender equality, rights for indigenous communities and other social issues are of paramount importance. This should matter greatly to Canadians because Trudeau has staked so much of his foreign policy on getting new trade agreements, especially with China, which has so far shown much less enthusiasm for this bilateral project than he has.

The setbacks that Trudeau has suffered in India and elsewhere in Asia recently may be harbingers of more embarrassments and disappointments to come. Trudeau’s next great foreign disappointment may even come on home soil. Presiding over this summer’s G7 in Quebec provides the prime minister with an opportunity to reclaim the respect for himself and for Canada that he has squandered during his last three Asian trips. It is a chance to demonstrate, as his admirers are fond of repeating like a mantra, that “Canada is back.”

Those lofty words sound ridiculous today. They will continue to sound ridiculous unless and until Trudeau forsakes the notion that the world is little more than a photo op and becomes less righteous about issues that, whatever their merits, the major global players have little interest in. Canada will be back when the prime minister pursues the country’s many vital economic and security priorities, rather than dancing for the cameras.

Matthew Fisher is a Fellow with the Canadian Global Affairs Institute. He was born in northwestern Ontario and raised there and in the Ottawa Valley. He has lived and worked abroad for 34 years as a foreign correspondent for the Globe and Mail, Sun Media and Postmedia. Assignments have taken him to 162 countries. He has been an eyewitness to 19 conflicts including Somalia, the Rwandan genocide, Chechnya, the Balkan Wars, Israel in Gaza and Lebanon, the two Gulf Wars and Afghanistan.