The Trudeau government’s plan to buy as many as 28 second-hand Australian F-18 Hornet fighter jets has been common knowledge for some time at the Williamtown airbase, three hours' drive north of Sydney.

Canada, as a long-time friend and ally, is more than welcome to the 39-year old planes, said an Australian air force F-18 aircraft technician I spoke with as we watched several of the fighters screaming into the sky last week, headed to an exercise over the Pacific Ocean.

The Hornets had been well maintained and considering their advanced years were in good shape, said the jet engine specialist. He warned, however, that because their airframes were old and had been pushed hard during multiple combat deployments to the Middle East, they had in some cases become badly corroded and needed repairs. There were also issues with outdated avionics. In other words, before they can enter service alongside Canada’s own aged CF-18s they will require costly, time-consuming upgrades.

Why, wondered this airman and others, was Canada buying 4th generation fighters from Australia, aircraft tracing their design back to the early 1970s, when the Australian government had concluded more than 10 years ago that its fleet of aging classic Hornets should be replaced—not upgraded—because upgrades would be a waste of public money?

With China and Russia buying sophisticated new aircraft designed in this century, and willing to sell them to Third World countries, it is a question Canadians should be asking, too.

Australia’s Hornets are for sale because that country has had governments that regard national defence as a top priority. Canberra has already started replacing its legacy Hornets with 72 stealthy, computer-linked, 5th generation F-35 jet fighters.

Canada was on a path to eventual purchase of the F-35 under Stephen Harper. But Prime Minister Justin Trudeau backed Canada into a corner by vowing during the 2015 election campaign never to buy them. “They clung to a plane that does not work and is far from working.” Trudeau said last year in ridiculing the F-35 although more than 100 of them were already flying at the time. The F-35 has since been declared operational by both the United States Air Force and the United States Marine Corps and has recently been deployed to the Far East to confront North Korea if its nuclear weapons and missile programs trigger a war.

The strategic point is this: The Trudeau government, as a stopgap on the way to an eventual competition at least several years from now to finally select a new fighter, has decided to buy an aircraft type that first flew in 1978 instead of the cutting-edge F-35s chosen by nearly all Canada’s allies, including Australia.

Ottawa’s pending purchase of hand-me-down F-18s provoked light-hearted derision from pilots and aircrew at RAAF Base Williamtown, although they would not speak for attribution because they had not been authorized to do so. Speaking privately, however, they were astonished that Canada, which like Australia made an initial investment of $150 million in the Joint Strike Fighter (F-35) development and acquisition consortium in 2002, was the only country not to have joined the other seven consortium partners in buying F-35s. 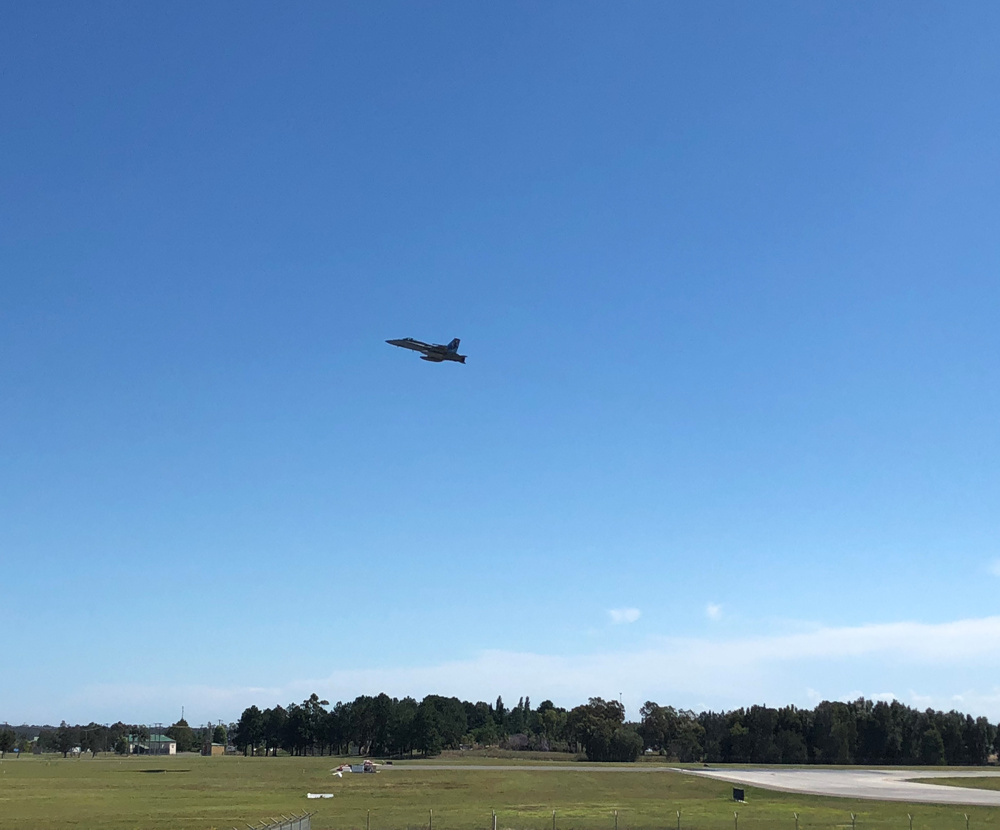 Figure 1: RAAF Base Williamtown, Australia – Royal Australian Air Force F-18 Hornets launch from this fighter base north of Sydney to participate in an exercise over the Pacific Ocean. (Photo by Matthew Fisher – November 2017)

Because of the perceived threat from China—which is spending hundreds of billions of dollars to try to make its military a match for the US and its allies—South Korea, Japan and Singapore have also bought the F-35. As has Israel, which declared 9 of them operational last week, while Germany and Belgium are considering purchasing them as well.

The Trudeau government had said that an emergency interim purchase of fighter jets was needed to close a capability gap because Canada would soon be unable to meet its commitments to the North Atlantic Treaty Organization (NATO) and North American Aerospace Command (NORAD), although the leadership of the two military alliances have never declared that such a gap exists or might soon exist.

The RAAF took delivery of its first two F-35s earlier this year and expects to declare No. 3 Squadron operational at Williamtown in 2020. Those jets will be among the F-18s that Australia will be sending to Cold Lake, Alberta and Bagotville, Quebec. That the RAAF has leapfrogged the RCAF in fighter jet capability by at least 10 years is only one part of a much larger story.

The RAAF began to receive 15 state-of-the-art P-8A Poseidon long-range reconnaissance aircraft last year. The P-8s, which are a military version of Boeing’s 737 passenger jet, are to replace P-3 aircraft that are similar to the RCAF’s fleet of nearly 40 year old CP-140 Auroras. Rather than buy new surveillance aircraft, Canada opted to upgrade the ones it has. The Australians have also purchased attack helicopters, while Canada chose to mount door guns on its Griffin utility helicopters.

As bad as things are for the RCAF, procurement is even more problematic for the Royal Canadian Navy. Australia has taken delivery of two massive Spanish-designed assault ships that can also be used as humanitarian aid platforms and is spending $50 billion on a fleet of French-designed submarines. New frigates and destroyers costing nearly $40 billion more are also in the mix.

Although Australia has had a few embarrassing procurement hiccups, it does not dither. It gets on with the business of preparing its military for what may lie ahead.

The disparity is huge. Australian taxpayers will pay $34.6 billion for national defence this year or slightly more than two per cent of GDP. Canada will spend $18 billion or about one per cent of GDP on defence, which is precisely half of what NATO has long demanded of it.

Ottawa has promised to increase spending by 70 per cent by 2026. But even that would still put Canada well behind Australia. Almost all of the money pledged by the Trudeau government is backloaded. Little of it will come for another five or six years.

Yet Canada has about 10 million more people than Australia and a much bigger economy. The emerging difference in capabilities results from very different attitudes about military spending and procurement. The usual Canadian answer for this is that Australia must spend a lot more on defence because it lives in a much tougher neighbourhood.

This is simplistic and ignores geography. North Korea is almost equadistant to Canada and closer to such major population centres as Vancouver than to Sydney. And Australia and China are only a couple of days sailing or a couple of hours closer in the air than China is from Canada. Nor do Australia’s closer neighbours such as Indonesia, which it sometimes spars with diplomatically, represent a major military threat. Moreover, Trudeau, like Harper before him, has made a lot of noise about Canada being a Pacific nation while putting few military assets or personnel on the West Coast.

The real reason Canada has fallen so far behind militarily is that since the 1950s Canadians have counted heavily on the United States for protection—have taken it as a given.

Australians once felt that way too, but as U.S. power and the will to use it have declined under the Obama and Trump administrations, there has been a growing debate over whether Australia can depend on the U.S. like it once did. This issue was the main topic in a white paper on foreign policy released late last month in Canberra. Following its publication some influential figures here suggested the U.S. was no longer a totally reliable partner and that Australia should plan accordingly.

Canada confronts many of the same problems as Australia in the Pacific, as well as a resurgent Russia in Europe. But even in the age of Trump and his America First agenda, Canadians continue naively to assume that the U.S. will always be there for them—or not to think about the matter at all.

One manifestation of this is Canada’s continuing refusal of Washington’s requests to join or help pay for an anti-missile umbrella to shield North America from nuclear-weapon-tipped missiles coming over the pole or down the Pacific coast even as North Korea ups the ante by testing missiles that can now strike every part of Canada.

The Canadian decision to buy used jets that Australia considers to be junk and yet again postpone the tough political decision about buying new combat aircraft to meet the complex, rapidly changing security challenges of the 21st century is further proof that Canada is not to be taken seriously on security matters. Canadians would do well to study how Australia has forged a broad political consensus in support of armed forces with the teeth necessary to defend its strategic interests. Small hope of that.

Matthew Fisher was born in northwestern Ontario and raised there and in the Ottawa Valley. He has lived and worked abroad for 34 years as a foreign correspondent for the Globe and Mail, Sun Media and Postmedia, and is a Fellow with the Canadian Global Affairs Institute. His assignments have taken him to 162 countries. He has been an eyewitness to 19 conflicts including Somalia, the Rwandan genocide, Chechnya, the Balkan Wars, Israel in Gaza and Lebanon, the two Gulf Wars and Afghanistan. @mfisheroverseas

POSTPONED DUE TO COVID-19