Brexit negotiations wrapped up for 2017 in a holiday glow as U.K. and EU negotiators came to a broad agreement on the terms of Britain’s exit from the EU.

As the warm and fuzzy feeling fades, it’s worth a reminder of what the agreement accomplished and how the situation stands entering a crucial year. March 29, 2019 is the deadline for Britain’s formal departure from the EU, but the two sides need to agree on a text by late 2018, because the EU and U.K. parliaments, and a 72 per cent supermajority of EU states, must approve the exit treaty before it can come into effect.

Last month’s deal came in time for EU member states to confirm that the Brexit talks on citizens’ rights, Britain’s financial obligations and the Irish border have progressed far enough to move on to the second stage of negotiations.

The agreement itself is notable partly because it happened, but also because it took so long to achieve. The EU had set an initial deadline of late October to discuss moving to the second stage of negotiations, but had to give an extension as negotiations had not proceeded far enough.

It was uncertain whether an agreement would be possible, especially after a tentative deal broke down on the initial deadline of Dec. 4, because the Democratic Unionist Party (DUP), which is supporting Prime Minister Theresa May’s minority Conservative government, disagreed with some of the language.

So the deal was a short-term victory for the beleaguered May who flew in for the last hours of negotiations and took part in a triumphant news conference afterwards.

What were the terms? The two sides agreed on an amount for the “divorce bill”, or the financial obligations that Britain had made to the bloc before voting to leave it: between £35 billion and £39 billion ($60 billion and $67 billion). The sides agreed on a number only in the last weeks of discussions.

They established wide-ranging protections for the roughly three million EU nationals living in the U.K. and 900,000 U.K. citizens in the EU. This has been an area of broad consensus for months.

And they made the mirage of an agreement on principles governing the Irish border, over which there was a major impasse until the late stages of negotiations.

There will be no hard border between the Republic of Ireland and Northern Ireland, according to the joint U.K.-EU statement. A hard border was widely expected to cause massive economic disruption. borderless arrangement between the Republic and Northern Ireland is also a building block of the 1998 Good Friday peace accord, which is credited with ending decades of Protestant-Catholic unrest in the north.

Yet it is difficult to see how a borderless arrangement is possible. 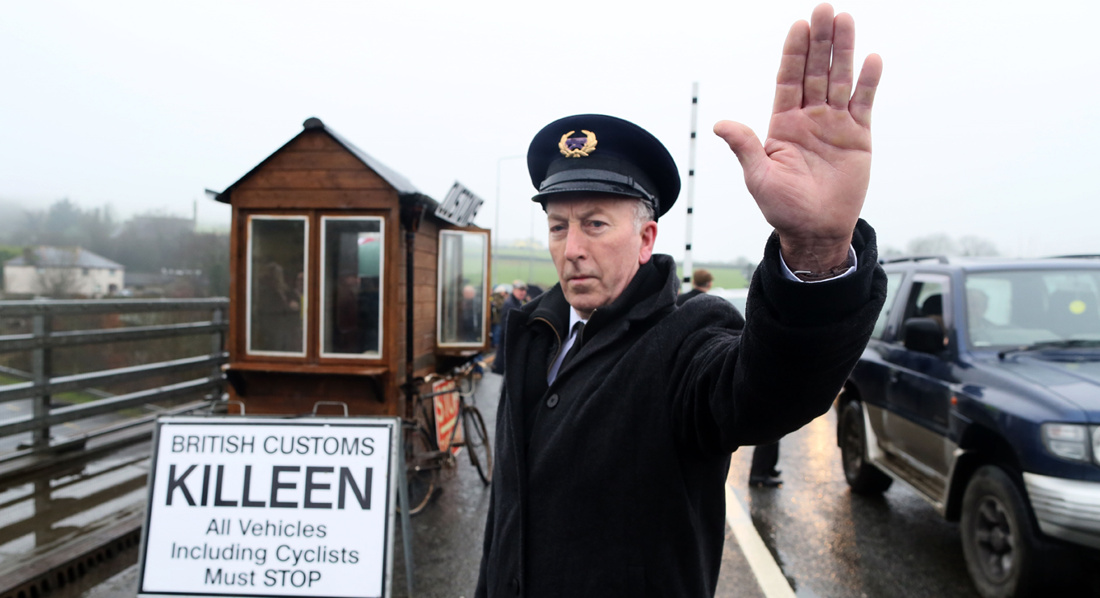 Figure 1: A mock customs post is set up at Ravensdale, on the Louth-Armagh border, as anti-Brexit campaigners hold a go-slow protest on the main road between Northern Ireland and the Republic of Ireland to highlight concerns about the impact on trade. (Niall Carson/PA)

The proposed soft border is supposed to co-exist with another requirement that “no new regulatory barriers” are introduced between the U.K. and Northern Ireland. This second phrase had been a major concern for the DUP, which did not want a Brexit agreement to result in Northern Ireland aligning with EU regulations to resume trade with the south. (A majority of voters in Northern Ireland voted to remain in the EU, but the DUP supports Brexit).

No specific ideas have been advanced to solve this dilemma, and it will surely occupy a great deal of time as the negotiations continue.

Within days of the agreement, David Davis, who leads the British negotiating team, poured cold water over the terms when he suggested that they were not legally enforceable. Davis was speaking mostly about the divorce bill, which, he argued, Britain would not be obliged to pay in the event that there was no agreement. He backtracked quickly, but faced substantial criticism from his European counterparts, who wondered if he can be trusted to keep his word.

Davis’ remarks also point to May’s ongoing political problems. May enjoys little personal support, while the Conservatives are torn between hard-core Brexiteers and MPs who favoured the Remain side in the 2016 referendum and still view the Brexit project with distaste.

Sometimes, the mere fact of an agreement is more important than what’s in it. This may be one of those times. But the question remains: how will the more complicated deals get done before time runs out?

Denis Clark is an assistant professor of British diplomatic history at the University of Calgary.