Now in its eleventh year, the Canadian Military Journalism Course is an established and innovative leader in not only military journalism, but in Canadian journalism education as a whole. No Canadian journalism school at any level offers its students any opportunity to prepare for working with the Canadian Forces or the Department of National Defence. 12 students participated in the 2012 course and through the help of the Lord Strathcona’s Horse (Royal Canadians) experienced being bivouacked in a tent for three nights. As well, this year’s participants had the opportunity to observe the training of 1,500 troops, the battle testing of 36 majors and were able to interact with soldiers of all ranks during Exercise Warrior Ram.

In order for the course to remain current, new elements were added and others dropped, including changing half of the reference material. The course ran from April 30-May 8 and for the seventh year in a row a quantitative evaluation revealed a marked increase in the students’ cognitive learning related to Canadian defence issues. The course has an established reputation in not only Canadian journalism schools, but in universities from coast to coast.

The course is supported by the Canadian Defence & Foreign Affairs Institute, the Centre for Military and Strategic Studies, and the Department of National Defence in Calgary, Edmonton and Ottawa. 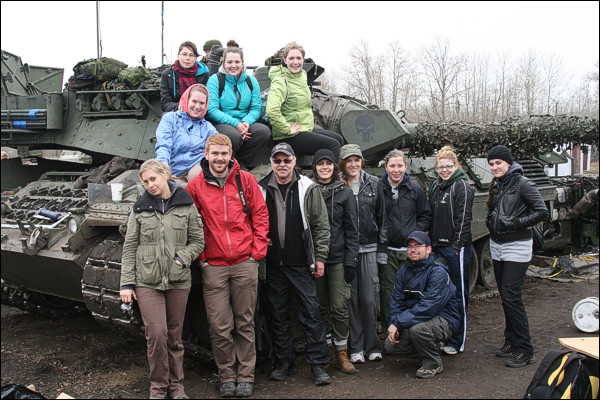